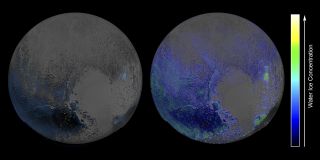 These maps of water ice on Pluto's surface were created using data captured by NASA's New Horizons spacecraft during its flyby of the dwarf planet on July 14, 2015. The map at left is an early effort; the one at right used modeling techniques to achieve greater sensitivity.
(Image: © NASA/JHUIAPL/SwRI)

Water ice is surprisingly abundant on Pluto's surface, a new map of the dwarf planet reveals.

"But despite its much greater sensitivity, the map still shows little or no water ice in the informally named places called Sputnik Planum (the left or western region of Pluto’s 'heart') and Lowell Regio (far north on the encounter hemisphere)," NASA officials wrote in a statement Thursday (Jan. 28). "This indicates that at least in these regions, Pluto's icy bedrock is well hidden beneath a thick blanket of other ices such as methane, nitrogen and carbon monoxide."

The new and old water-ice maps were both made using infrared-light observations captured by New Horizons' Ralph/Linear Etalon Imaging Spectral Array (LEISA) instrument, at a distance of about 67,000 miles (108,000 km) from Pluto, NASA officials said.

New Horizons is currently zooming toward a small object about 1 billion miles (1.6 billion km) beyond Pluto called 2014 MU69. If NASA approves and funds a proposed extended mission, the spacecraft will study 2014 MU69 up close on Jan. 1, 2019.

New Horizons is also still beaming home the many photos and measurements it captured during the July 14 flyby. All of the close-encounter data should be on the ground by this coming fall, mission team members have said.