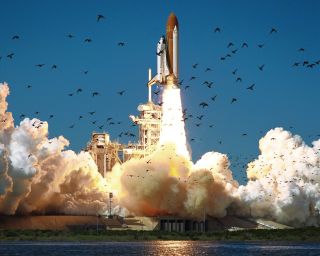 The space shuttle Challenger launches on Jan. 28, 1986. The mission would end in tragedy just 73 seconds into the flight.
(Image: © NASA)

A new documentary about the space shuttle Challenger accident airs tonight (Jan. 25), three days before the 30th anniversary of the tragic event.

On Jan. 28, 1986, Challenger exploded just 73 seconds after blasting off from Kennedy Space Center in Florida, killing all seven astronauts aboard, including Christa McAuliffe, whom NASA had chosen to become America's first teacher in space.

The new documentary, called "Challenger Disaster: Lost Tapes," re-examines the disaster using contemporary audio recordings and rare video footage, including interviews with McAuliffe and clips of the New Hampshire social-studies teacher practicing some of the lessons she had planned to send down to kids on Earth from orbit. [Challenger Remembered: Photos from NASA's Tragic Shuttle Disaster]

"Christa was just a wonderful teacher, a wonderful human being and a wonderful representative of our profession," former NASA astronaut Barbara Morgan told Space.com. Morgan, an educator herself, served as McAuliffe's backup on the Challenger mission and eventually made it to space aboard the space shuttle Endeavour in 2007.

McAuliffe was a payload specialist on the doomed Challenger mission, which is known as STS-51-L. The other astronauts who lost their lives that day were mission commander Dick Scobee; pilot Mike Smith; mission specialists Judy Resnik, Ellison Onizuka and Ron McNair; and payload specialist Greg Jarvis.

Investigators later determined that a rubber seal called an O-ring in one of the shuttle's solid rocket boosters failed during launch, partly as a result of unusually cold weather (which caused the O-ring to harden).

This failure allowed hot, high-pressure gas to escape and damage Challenger's huge external fuel tank, as well as the equipment that attached the solid rocket booster to the tank.

The space shuttle fleet was grounded for 32 months in the wake of the Challenger disaster, finally taking to the skies again in September 1988 on Discovery's STS-26 mission. The program suffered another disaster on Feb. 1, 2003, when the shuttle Columbia broke apartupon re-entering Earth's atmosphere, killing all seven astronauts aboard.

The shuttles stopped flying for good in July 2011, and the surviving orbiters are now museum pieces. NASA currently relies on Russian Soyuz spacecraft to get its astronauts to and from orbit, though the space agency is encouraging privately developed American spaceships to perform this taxi service. Indeed, NASA awarded a total of $6.8 billion to Boeing and SpaceX in September 2014 to finish work on their crew capsules, which the agency hopes will be up and running by the end of next year.