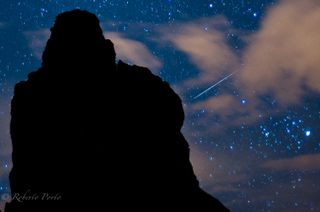 The 2016 Quadrantid meteor shower of 2016 peaks before dawn on Monday Jan. 4, and could be one of the best of the year, weather permitting. Here, astrophotographer Roberto Porto captures a Qudrantid meteor over Tenerife in Spain's Canary Islands in 2012.
(Image: © Roberto Porto)

The first meteor display of 2016 – the Quadrantid meteor shower - will hit its peak early Monday morning (Jan. 4), with a strong display of "shooting stars" likely for Europe and North America.

Weather permitting, observers in the eastern regions of the United States and Canada will be in position for the maximum activity from the Quadrantid meteor shower, which is expected about 3 a.m. EST, when the radiant of the shower will be well up the dark northeastern sky. This is perfect timing – it falls right in our prime meteor-watching hours before dawn.

The meteors appear to radiate from a spot on the sky midway between the last handle star of the Big Dipper and the head of Draco, the Dragon. The radiant is actually located within the boundaries of the constellation of Boötes, the Herdsman, so we might expect them to be called the "Boötids." [See amazing photos from past Quadrantid meteor showers]

But back in the late-18th century there was a constellation here called Quadrans Muralis, the "Mural or Wall Quadrant" (an astronomical instrument). It is long-obsolete star pattern, invented in 1795 by J.J. Lalande to commemorate the instrument used to observe the stars in his catalogue. Adolphe Quetelet of Brussels Observatory discovered the shower in the 1830s, and shortly afterward it was noted by several astronomers in Europe and America. Thus they were christened "Quadrantids" and even though the constellation from which these meteors appear to radiate no longer exists, the shower's original moniker continues to this day.

For mid-northern observers, the meteor shower's radiant stays near the northern horizon until midnight but rises high in the northeast by dawn. And come Monday morning observers all across North America may experience one of the best meteor showers of the year. Morning twilight will not interfere until about 6 a.m. local time. The predicted hour for the peak – 3 a.m. EST – comes from the Canadian Observer's Handbook.

At greatest activity, probably anywhere from 60 to 120 meteors per hour will be seen. These moderately swift, many leaving trains, may be seen by a single observer with a dark sky. Any light pollution cuts down the numbers greatly. Give your eyes at least 15 to 20 minutes to adapt to the dark before started a serious meteor count.

According to Guy Ottewell, editor of the 2016 edition of the Astronomical Calendar, "Faint Quadrantids caused by small particles may peak half a day earlier, and there may sometimes be a second peak some hours later, detected partly by radio observations."

However the Quadrantid influx is sharply peaked: six hours before and after the main peak, these meteors appear at only a quarter of their highest rates.

It had always been believed that the "Quads" were possibly derived relatively recently from a small comet.  And in 2003, astronomer Peter Jenniskens of NASA, found a near-Earth asteroid (2003 EH1) that seemed like it was on the right orbit to be affiliated with the Quadrantids. Some astronomers think that this asteroid is really a piece of an old, "extinct" comet; perhaps a comet that was recorded by Chinese, Korean, and Japanese observers during the years 1490-91. Maybe that comet broke apart, and some of the pieces became the meteoroids that make up the Quadrantid stream. [How Meteor Showers Work (Infographics)]

One point I haven't mentioned until now is the situation regarding the moon.

Last year, the moon all but ruined the Quadrantids. It was nearly full and lit up the sky all night long like a celestial spotlight, obscuring all but the brightest shower members. This year will be different. The moon will be two days past last quarter – a wide lunar crescent – that rises around 2 a.m. It would have been nice if the moon were a skinnier crescent, or better yet not in the sky at all. As it is, the moon's presence will provide a bit of a minor nuisance, but certainly viewing conditions will be much better than last year.

Lastly – and I've touched on this point before, but certainly it should be addressed again: Likely your local weather will be more appropriate for taking in a hot bath as opposed to a meteor shower. And indeed at this time of year, meteor watching can be a long, cold business.

You wait and you wait for meteors to appear. When they don't appear right away, and if you're cold and uncomfortable, you're not going to be looking for meteors for very long! Therefore, make sure you're warm and comfortable. Warm cocoa or coffee can take the edge off the chill, as well as provide a slight stimulus. It's even better if you can observe with friends. That way, you can cover more sky.

Editor's note:If you capture an amazing photo of the Quadrantid meteor shower and would like to share it with us and our news partners in a possible story or image galleries, send images and comments in to managing editor Tariq Malik at spacephotos@space.com.