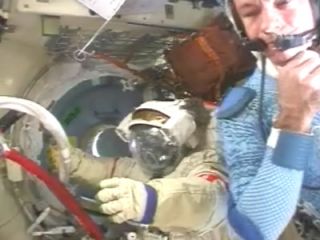 Two astronautswill venture outside the International SpaceStation (ISS) today for a short round of orbital golf and laboratorymaintenance.

ISS Expedition14 commander MichaelLopez-Alegria and flight engineer MikhailTyurin are slated to spend six hours working outside the station in whatwill mark the first of four planned spacewalks during their six-month mission.

"The crewis taking this very, very seriously," said Holly Ridings, NASA's leadExpedition 14 flight director for today's spacewalk. "So they've been doing alot of practice, some of it on their own time."

Almostimmediately after stepping into space today, Tyurin and Lopez-Alegria will setup for their orbital golf shot on a ladder jutting out from their startingpoint: the station's Russian-built Pirs docking compartment [image].

"I will bebehind him yelling, 'Fore!'" Lopez-Alegria has said of Tyurin's orbital golfsession. "I guess we'll just have to see how far it goes. It depends how muchof it he gets."

Tyurin, a veteranRussian cosmonaut, will use a gold-plated six iron and an ultra-light golf ballthat weighs just one-tenth of an ounce (three grams) [image].Because his movements are restricted inside the bulky Orlan spacesuit, Tyurinmust hit the ball with a sort of one-handed swat.

"He'll bedirecting it with a putting-type motion," Glenda Laws, NASA's lead Expedition14 spacewalk officer, said of he space shot. "And it will head out over the aftend of the [Zvezda] service module."

Tyurin willcarry three golf balls into space with him, but may not hit all of them, Lawssaid. That decision will be made by the cosmonaut and Russian flight controllers,she added.

Lopez-Alegria,meanwhile, will stand by to help stabilize Tyurin and film his golf shot. Thevideo will later be used in an Element 21 commercial.

"We kind ofthough that this was going a kind of fun thing to do because we're using aspace material and we're introducing that in the golf industry," Element 21president and CEO Nataliya Hearn told SPACE.com.

NASA andRussian safety officials have found that the upcoming golf shot poses no debrisrisk to the ISS or a Decembershuttle mission, but disagree on how long the golf balls may stay in orbit.NASA expects them to deorbit after a few days, while Russian studies yieldedmaximum flight times of three years or so.

"On thisEVA, I think the bulk of the activities are research oriented," said KirkShireman, NASA's deputy ISS program manager, adding that certain activitieswill aid future tasks aboard the station.

One suchtask includes the relocation of a navigation antenna at the aft end of thestation's Zvezda module. The antenna will help guide an unmanned European cargoship to the Zvezda docking port some time in mid-2007.

ARussian-built Progresscargo ship is currently docked at Zvezda. Another spacewalk chore calls forTyurin and Lopez-Alegria to lash down an antenna on that Progress 23 vehiclethat did not properly stow itself when the spacecraft arrived last month [image].

ISSmanagers want to make sure the antenna does not catch a nearby handrail when itundocks next year.

"When wedepart, basically, the hooks open and there's a spring force that pushes away,"Shireman said. "So if any part of the Progress vehicle was attached still tothe station, it would cause the Progress to swing and its trajectory would notbe what we intended and could pose a hazard to the ISS."

Thespacewalkers will also inspect a telescoping Russian crane and install a newscience instrument known as BTN Neutron to monitor charged and neutralparticles in low-Earth orbit, especially during solar flares and other events.

If timepermits, the Expedition 14 astronauts may also retrieve a Russian materialsexposure experiment and replace it with a fresh one.

The golfshot, too, has been referred to as an experiment. Element 21 officials hope itwill inspire people on Earth, as well as commemorate the 35thanniversary of NASA astronaut Alan Shepard's lunar tee off [image]during the 1971 Apollo14 mission to the Moon.

"[S]paceseems to be very esoteric, and whatever happens there seems to have very littlerelationship to whatever happens down here," Hearn said, adding that it is awelcome coincidence that the golf shot comes during Expedition 14. "And whenyou've got Alan Shepard playing golf on the Moon, a sport played by millions inthe U.S., it brings a little bit of space back to Earth.

"It makesit more real, it makes it more human, and more tangible," she said.

NASAwill provide a live broadcast of the ISS Expedition 14 crew's spacewalk on NASATV beginning at 5:00 p.m. EST (2200 GMT). You are invited to followthe spacewalk using SPACE.com'sNASA TV feed, which is available by clicking here.