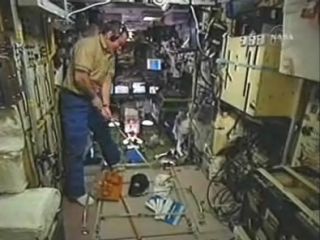 The Canadian sports equipment firm Element 21 is gearing upfor an orbital kickoff for its space-age clubs in what promises to be thelongest drive in the history of golf.

OnWednesday, Russiancosmonaut Mikhail Tyurin will use a gold-plated Element 21 golf club to hitat least one ball off the International SpaceStation (ISS) [image].The stunt will kick off a plannedsix-hour spacewalk by Tyurin and ISSExpedition 14 commander Michael Lopez-Alegria.

"We'll haveopened a golf course in space," David Sindall, co-founder of the Toronto-basedElement 21, told SPACE.com of the upcoming golf shot. "It's the smallestclubhouse definitely...but with the largest real estate, infinite real estate,and the longest fairway."

Clad in hisbulky Russian-built Orlan spacesuit,Tyurin will make a one-handed swing with an Element 21 six-iron club, aiming anultra-light golf ball out over the aft end of the ISS opposite the station'sdirection of travel.

Sindall andElement 21 president and CEO Nataliya Hearn have spent more than two years andan undisclosed amount of money, to pay Russia's Federal Space Agency for the spacewalktime, preparing for what they're billing as the "Golf Shot Around the WorldMission."

Video ofTyurin's orbital shot will be used in an Element 21 commercial to promote thefirm's golf clubs slated to hit the store shelves next year [image].The clubs are made from the lightweight, yet sturdy, metalscandium, which has also been used on segments of the ISS and Russia's Mir space station.

"This isnot just a one day or a several seconds event," Hearn told SPACE.com."The ball will continue orbiting the Earthafter the shot."

Just howlong the ball orbits the Earth is the subject of some debate.

Element 21and Russian space officials have estimated that the golf balls--Tyurin willcarry three outside the ISS, but may not use them all--could remain in orbit formore than three years. NASA officials, however, maintain the golf balls willcircle Earth for a mere three days before burning up in the atmosphere.

"I believeour data to be accurate," NASA's deputy ISS program manager Kirk Shireman saidlast week. "I suspect that there were some initial conditions or assumptionsthat were provided."

Thediscrepancy could be traced to a change in the balls themselves.

Initially,Tyruin was slated to smack a gold-plated golf ball [image]that could be tracked from Earth, but his targets were later changed to whiteballs weighing only one-tenth of an ounce (three grams), or about one-third theweight of a U.S. dollar bill [image].The average Earthly golf ball weighs about 1.5 ounces (45 grams).

The newgolf balls' short orbital lifespan, direction of travel and light weightassures that the pose no debris risk to the ISS or NASA's upcoming shuttle launch on Dec.7, the U.S. space agency said.

The orbitalgolf stunt is one-part commercial and one-part celebration to commemorate the35th anniversary of a lunar tee-off by the late Alan Shepard duringNASA's Apollo14 mission to the Moon in 1971 [image].The stunt was delayedfrom a July spacewalk to allow time to repair a camera on the space station's railcar-likeMobile Transport system.

"I took twoclasses on golf because of this," Tyurin said before the flight. "Golf is not avery popular game in Russia."

In fact,Tyurin--a hockey player at heart--trained with the Ladies Professional Golf Association(LPGA) Hall of Famer Carol Mann and PGA director of instruction Rick Martino onEarth, and donned an Orlan spacesuit for underwater practice as well.

"He'sactually fallen in love with the game," Hearn said.

NASA video hasshown Tyurin rehearsing the golf shot both inside and outside his spacesuit [image].

The Element21 golf shot is the first item on the agenda for tomorrow's ISS spacewalk andwill take place atop a ladder that juts out from the space station'sRussian-built Pirs docking compartment that doubles as an EVA airlock.

Lopez-Alegriawill record video Tyurin as he hits the golf ball aft over the space station'sRussian-built Zvezda service module from a custom-built tee that resembles asort of conical spring [image].

"We weremaking a joke that maybe we'd have a men's tee and a ladies tee," Hearn said."The men would be aiming for Mars andthe women would aim for Venus."

Hearn saidshe hopes the tee will remain on the ISS for use by future astronauts or space tourists. Sindall addedthat the firm has drawn up special medals to award future ISS clubhouse memberswhose dues would then go to charity [image].

The Element21 golf club currently aboard the ISS has been signed by each astronaut tovisit the station since its Fall2005 arrival and will be returned later to be displayed in a museum orauctioned off for charity, Hearn said.

"We see this as the next revolution in the golf industry,"Hearn said. "I think it's really making a statement that this material willchange the face of golf."