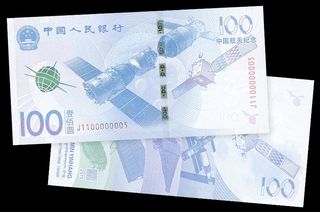 China has issued new banknotes and coins to commemorate more than 40 years of spaceflight achievements.
(Image: © People's Bank of China/collectSPACE.com)

The designs of the new 100-yuan banknotes and 10-yuan coins feature crewed and robotic spacecraft that span 45 years of Chinese launches. Issued in late November, the commemorative money is legal tender but not intended for circulation.

Bank customers are limited to purchasing three coins and 10 banknotes each, according to Chinese media reports.

Both the bills and coins feature Shenzhou 9, China's 2012 crewed spacecraft, docking with the Tiangong-1 spacelab. The mission was the first to man the space station module and included China's first female taikonaut, Liu Yang. [China's Shenzhou 9 Space Mission in Pictures]

Depicted alongside Shenzhou 9 on the front of the note is Dongfanghong-1, China's first satellite that was launched in 1970, and Chang'e-1, the country's first lunar orbiter that circled the moon from 2007 to 2009.

The 100-yuan (about $15.50) bill's reverse reproduces the illustration of Chang'e-1 as part of a progression of air and space developments, including a Chinese biplane and first domestically-built jetliner, as well as the planned Tiangong space station to be launched in 2020.

The banknote, like the coin, is dated for 2015, and reads on its front "Chinese Spaceflight Commemorative."

The 10-yuan ($1.55) coin features the seal of the People's Republic of China on one side and the Shenzhou docking on the other. Surrounding the spacecraft are other Chinese space vehicles, including a Long March rocket, Chang'e-1, Dongfanghong-1, Tiangong and Yutu, China's lunar rover that landed on the moon in December 2013.

The coin also includes an illustration of Zhinü, a weaver girl from the Chinese folk tale about two lovers who were separated by the Milky Way (Silver River). The weaver and cowherd were reunited by a bridge of magpies, and a flock of the birds are depicted on lower right of the coin.

China is not the first nation to commemorate its spaceflight milestones on its money. Russia and the European Union have celebrated their space and rocket programs on legal tender coins. Canada has done so as well, in addition to redesigning its circulated $5 banknote in 2013 to feature the Canadarm2 and Dextre robot arms on the International Space Station.