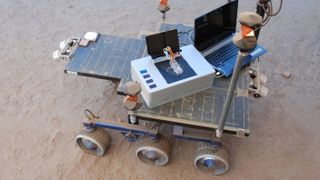 NASA's new "chemical laptop" perches on a test rover at the Jet Propulsion Lab's Mars Yard next to an ordinary laptop. Such a laptop could detect signs of life on other worlds.
(Image: © NASA/JPL-Caltech)

New NASA technology straight out of "Star Trek" could help scientists detect life on other worlds.

The device, dubbed the "chemical laptop," is a miniature, portable laboratory that resembles the TV show's famous tricorder scanning device, and is designed to make data collection easier and faster than ever before.

The laptop, currently in development at NASA's Jet Propulsion Laboratory (JPL) in Pasadena, California, is a chemical analyzer made to detect both amino acids and fatty acids, often called "the building blocks of life," in samples from extraterrestrial terrain. Amino acids bind together to create proteins, which are vital to almost all processes that occur within a cell, and fatty acids are an important component of cell membranes, so researchers believe finding both could indicate that life is now or was once present. [10 Exoplanets That Could Host Alien Life]

Though it's roughly the size of a regular laptop, the chemical laptop isn't like any computer on store shelves. It's much thicker, to make room for chemical analysis components inside. But perhaps the biggest difference is that this laptop doesn't shut down when it gets wet — it actually needs liquid to work.

This could be "an especially useful tool for icy-world targets such as [Saturn moon] Enceladus and [Jupiter moon] Europa," said Jessica Creamer, a NASA postdoctoral fellow based at JPL. "All you would need to do is melt a little bit of the ice, and you could sample it and analyze it directly," she said in a statement.

The device uses technology similar to an espresso machine to analyze a sample. It picks up a liquid or ice sample, puts it in a tube with liquid water and heats it above 212 degrees Fahrenheit (100 degrees Celsius). Then, it mixes the sample with a fluorescent dye that attaches to amino and fatty acids.

Like left and right hands, left-handed and right-handed amino acids are mirror images of each other. The molecules have the same elements attached in the same order, but since they mirror each other, they’re fundamentally different.

Living things on Earth are made up almost exclusively of left-handed amino acids, but scientists believe it's possible that life on other worlds could be made of right-handed amino acids. The key is that life would create more of whichever type of amino acid it was made of, leading to a higher prevalence of one than of the other.

"If a test found a 50-50 mixture of left-handed and right-handed amino acids, we could conclude that the sample was probably not of biological origin," Creamer said in the statement. "But if we were to find an excess of either left- or right-[handed amino acids], that would be the golden ticket. That would be the best evidence so far that life exists on other planets."

A microchip inside the laptop separates left-handed and right-handed amino acids so scientists can determine the ratio. Researchers tested the chemical laptop last year at JPL's Mars Yard, a simulation of the Martian landscape. They'll do another test soon in the Atacama Desert in Chile in preparation to send the laptop to other worlds like Mars and Jupiter's moon Europa.