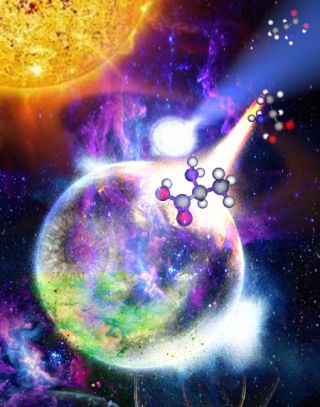 Left-handed amino acids are favored in Earth lifeforms over right-handed molecules. This trend supports the idea that the ingredients for life were delivered to our planet via impacting meteorites, researchers say.
(Image: © National Astronomical Observatory of Japan)

The mysterious bias of life on Earth toward molecules that skew one way and not the other could be due to how light shines in star- and planet-forming clouds, researchers say.

If correct, these findings suggest the molecules of life on Earth may initially have come from elsewhere in the cosmos, scientists added.

The organic molecules that form the basis of life on Earth are often chiral, meaning they come in two forms that are mirror images, much as right and left hands appear identical but are reversed versions of each other.

Strangely, the amino acids that make up proteins on Earth are virtually all "left-handed," even though it should be as easy to make the right-handed kind. Solving the mystery of why life came to prefer one kind of handedness over the other could shed light on the origins of life, scientists say. [7 Theories on the Origin of Life]

One possible cause for this bias might be the light shining on these molecules in space. One can think of all light waves as corkscrews that twist either one way or the other, a property known as circular polarization. Light circularly polarized one way can preferentially destroy molecules with one kind of handedness, while light circularly polarized the other way might suppress the other handedness.

To see how much light is circularly polarized in outer space, astronomers used a telescope at the South African Astronomical Observatory to detect how light is polarized over a wide field of view across the sky encompassing about a quarter diameter of the moon.

The scientists focused on the Cat's Paw Nebula about 5,500 light-years from Earth in the constellation Scorpius. The nebula is one of the most active star-forming regions known in the Milky Way.

Computer simulations the astronomers developed suggest this large amount of circular polarization is due to grains of dust around stars. Magnetic fields in the nebula align these dust grains, and light that scatters off these aligned grains end up circularly polarized — dust on one side of the magnetic field gives light scattering off it one kind of circular polarization, while grains on the other side have the opposite effect.

Chemical reactions inside nebulas can manufacture amino acids. These molecules end up possessing a certain handedness depending on the light shining on them. The researchers suggest left-handed amino acids may then have rained down on Earth by piggybacking on space rocks, resulting in one handedness dominating the other.

"Left-handed amino acids produced by circular polarization in space can be delivered by meteorites," Kwon said.

The researchers will continue to look for circular polarization in other star- and planet-forming regions. They detailed their findings March 1 in the journal Astrophysical Journal Letters.