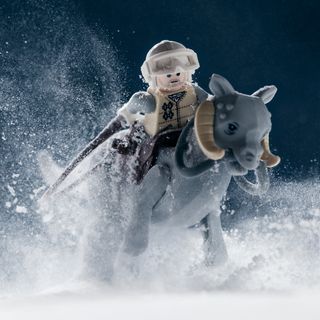 Lego Star Wars kits, and especially its minifigures, pack a lot of personality into a few pieces of plastic. That goes double for photographer Vesa Lehtimäki's new Lego photo book.

Lehtimäki's project started when he was photographing his son's toys, but he soon realized that the little Star Wars Legos were worth a larger-scale project. To create more involved tableaus, he expanded far outside the scope of just Legos: shooting outdoors, shining lasers and using quite a lot of baking soda in place of snow.

According to the book's introduction, Lehtimäki's Lego Star Wars photos have made appearances on a variety of online media, but this is the first time it's been collected into hard copy — just in time to celebrate the release of "Star Wars: The Force Awakens" in December.

The 176-page book focuses on the original "Star Wars" trilogy, and comes with a behind-the-scenes section at the end that describes the photographer's process and how to reproduce the more unusual elements of his work, like falling snow.

The process can be very intensive, but some shoots go more quickly than others. "It varies a lot," Lehtimäki said in a Q&A provided by DK Publishing. "I would have to say it's from one hour to four years."