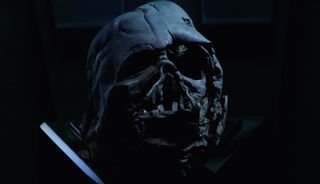 Screen grab from the new trailer for "Star Wars: The Force Awakens." The movie will be released on Dec. 18, 2015.
(Image: © Walt Disney Studios)

A new trailer for "Star Wars Episode VII: The Force Awakens" launched on TV and the Internet late Monday (Oct. 19), marking the official start of ticket sales for the highly anticipated film.

The 2-minute trailer — the third released to date for "The Force Awakens" — debuted during halftime of ESPN's "Monday Night Football" broadcast, which featured the Philadelphia Eagles and the New York Giants.

"The Force Awakens" takes place 30 years after the events of "Star Wars Episode VI: Return of the Jedi," which came out in 1982. The trailer does not spell out exactly what happens in the new film, though it shows that a successor to Darth Vader aims to finish what the iconic villain started. And it appears there will be lots of chases, battles — including the light-saber variety — and explosions as well.

The upcoming film stars familiar "Star Wars" faces such as Harrison Ford, Carrie Fisher and Mark Hamill, and it introduces new blood in the form of Oscar Isaac, John Boyega and Daisy Ridley, among others. "The Force Awakens" will be released in theaters throughout the United States on Dec. 18. You can buy tickets online now; see http://www.starwars.com for details.