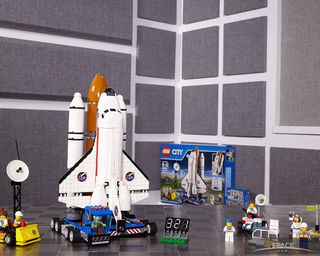 Space.com had the chance to build Lego City's new Spaceport set and learn more about how it was designed.
(Image: © Jeremy Lips/Space.com)

We finally got our hands on Lego's new Spaceport set, and it was awesome — so we reached out to the kit's designers to hear more about it.

After two hours of construction (and a video!), Space.com was impressed by the Spaceport's scale and all the different little parts: a robotic arm bearing a satellite that extended from the shuttle, seating room for two astronaut minifigs, and even a mobile platform to drive the space shuttle out to the Launchpad. We also appreciated all the female minifigs, including astronauts, scientists and an engineer bearing a tiny blueprint of the shuttle.

We talked with Lego City designer Andrew Butler Coghill and design director Ricco Krog by email to learn about the making of the new sets and what Lego has in store for space fans. [Photos: Legos and Space Travel]

Space.com: The Lego Spaceport and its support kits are the first space-themed city sets in what seems like several years. What was the inspiration behind the new sets for 2015, and why now?

Lego City: Here in Lego City a lot of our inspiration comes from real-life situations and environments. We have always based our product lines on things that kids around the world might actually see in real life. For example, seeing a fire engine or a space shuttle, things which exist in our everyday environment, help us to create awesome models to hopefully inspire the kids. It's definitely been a while since our previous Space launch so we felt it was time to bring to life a load of ideas that we've been itching to build. This time around we dialed up the science aspect and focused on creating a series of different scenarios. With the spaceport we wanted to build a set where we could lift off! We all know how important and exciting it is launching a shuttle into space, so we built a mobile transporter to help carry the shuttle onto the launch deck and up into space!

Space.com: What is it about the Spaceport kit that you think sets it apart from its predecessors?

Lego City: The Spaceport set is the first of its kind to put the entire space shuttle on wheels. We spend a lot of time working with kids at Lego HQ to make sure that the product we're making is as fun and exciting as possible. We learned that although a spaceport is super cool, putting the whole thing on wheels and being able to launch anywhere was even better.

Finding small stories and play-starters which might help to inspire the kids was also key. The yellow service car, for example, has seats to be able to transport the astronauts and their gear to the shuttle. The scientist has the blueprints to the spacecraft and the booster rockets can be detached from the fuel cell so that kids can really act out a proper liftoff!

As always, we look at ways to help update and refresh our Lego models. We designed a handful of brand new Lego elements to help create a super cool new spacecraft and complete the look of the rocket top.

Space.com: What was the greatest challenge for the team designing the Spaceport set, and how did they overcome it?

Lego City: It's important with our models to make sure that we hit the right qualities. The Lego motto reads "Only the best is good enough," so when building a model like the Spaceport it was key that we made sure the finished model was not only fun to build and play with but strong enough to be able to handle the journey into outer space. The shuttle's fuel cell and boosters, for example, are reinforced with long cross axle technic beams to help battle any rough turbulence.

One particular challenge was the question of connecting the shuttle to the rockets. We worked long and hard on trying to figure out a system which would be strong enough to hold the two together, but easy enough to pull apart and play. Finally, we found a solution which uses the ball and cup elements that we often use to connect cars and trucks to trailers.

Space.com: What type of research with NASA, if any, did the design team do while planning out Spaceport and other sets? Were there any visits to NASA's Kennedy Space Center? If so, what were the designers' impressions?

Lego City: There has not been research with NASA for the recent Lego City space line. However, over the years we have engaged in different events and meetings with NASA, getting a lot of impressions and inspiration.

Designers have visited different NASA locations, among those both Kennedy and Johnson space centers. Some of us have even been test driving the new lunar rover that was under development for visiting the moon again, so you can imagine the excitement among the designers when visiting NASA. It's hard not to get extremely impressed with all the achievements that NASA stands for, and NASA will always be an area for inspiration.

Space.com: Aside from the play opportunities, what does the design team hope children take away from the space shuttle kit in terms of space exploration, especially now that NASA's space shuttle fleet is retired?

Lego City: Dream big. One of the most special things about the NASA program is that it proved to people all over the world that we can build anything we set our minds to.

Our job as designers at the Lego Group is to help inspire the builders of tomorrow with the Lego brick as a creative foundation. The beauty of the Lego system is that all our products and our elements can be mixed and built together, so whether it's a gravity defying space train, a double-decker rocket, or a 12 wheeled, all terrain lunar explorer we hope that we can inspire kids to build their own creations. The sky's the limit.

Space.com: One of our favorite details in the Spaceport set is the female engineer with a set of space shuttle blueprints. What are the design team's favorite elements in the set, and why?

Lego City: From the satellite build to the folding Canadian arm inside of the shuttle, there are a lot of cool details throughout the set. A couple of things which really stand out, though, are perhaps the new space shuttle nose that we created especially for this theme. It took us a while to get the shape and we used a lot of varied techniques such as CAD and sculpting with clay to get it looking just right. Another thing is the attention to detail with graphics. The graphic designers put a lot of effort into creating labels and decorations (like the scientist's blueprint) that inspire story telling for the kids and enhance the value of the product.

Some of the coolest elements have got to be the Astronaut suit with its gold visor, but a particular favorite is the front of the yellow service car. This element is actually a super classic vehicle window which has been in the Lego Portfolio for a long, long time. We color-changed this element and used it as the nose of the vehicle to create some simple but super-effective newness.

Space.com: And finally, with Spaceport, the Utility Shuttle, the Trainer Jet and Starter Kit released this summer, can Lego City Space fans look forward to more space sets coming in 2016?

Lego City: That's it for this year's Space lineup, but stay tuned! We have loads of exciting new products in the pipeline, lots to look forward to and lots of cool parts to add to your very own space creations!