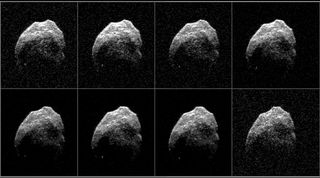 New photos show the less spooky side of the big asteroid that flew past Earth on Halloween.

"The images look distinctly different from the Arecibo radar images obtained on Oct. 30 and are probably the result of seeing the asteroid from a different perspective in its three-hour rotation period," Lance Benner, of NASA's Jet Propulsion Laboratory in Pasadena, California, said in a statement Tuesday (Nov. 3).

"The radar images of asteroid 2015 TB145 show portions of the surface not seen previously and reveal pronounced concavities, bright spots that might be boulders and other complex features that could be ridges," added Benner, who leads NASA's asteroid radar research program.

The researchers beamed microwaves at 2015 TB145, which researchers suspect may be a dead comet, using the Goldstone antenna, then collected the radar "echoes" using the Green Bank dish. The resulting photos feature a resolution as fine as 13 feet (4 m) per pixel, NASA officials said.

Researchers had eagerly anticipated the Halloween flyby, which marked the closest known approach of such a large space rock until August 2027. 2015 TB145 itself won't be in Earth's neck of the woods again until September 2018, when the asteroid — which was discovered just three weeks ago, on Oct. 10 — comes within about 24 million miles (38 million km) of our planet, NASA officials said.