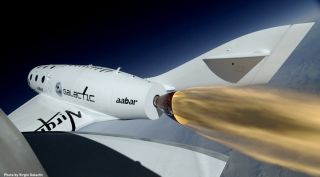 It's been one year since Virgin Galactic's SpaceShipTwo space plane broke apart during a test flight, a tragic accident that killed the copilot and seriously injured the pilot. Now, the commercial spaceflight company is moving forward on construction of its next SpaceShipTwo passenger spaceliner as it pursues other projects to become a global competitor in the new frontier of commercial space.

Founded in 2004 by billionaire Richard Branson, Virgin Galactic has made headlines for pre-selling tickets for its private SpaceShipTwo spaceplane at $250,000 a passenger. Nearly 700 people have signed up, despite there being no specific timeframe for when the flights will become available. The company is also branching into other space-related ventures, including the development of the reusable LauncherOne vehicle, which will deliver small satellites into orbit at relatively low cost.

At an industry meeting earlier this month, the company's CEO George Whitesides said, "The accident that we had on Oct. 31 last year was a tough blow for Galactic but it was one that will not define the company. It was one that we must move past and we are moving past with determination and with spirit." [Photos: Virgin Galactic SpaceShipTwo on a Rocket-Powered Flight]

"I have never been so optimistic as I have been at this moment," Whitesides said in a talk he delivered at the International Symposium for Personal and Commercial Spaceflight (ISPCS) in Las Cruces, New Mexico, on Oct. 8. "I think we really are at the verge of doing great things in opening up space, not just at [Virgin] Galactic but across the industry. […] I think that we are moving from a period of euphoria, to a period of real, measureable, but tough, progress."

On Oct. 30, 2014, SpaceShipTwo broke apart during a test flight over the Mojave Desert. The vehicle was designed and built for Virgin Galactic by the company Scaled Composites (their original design, called SpaceShipOne, won the $10 million X-Prize in 2004). An investigation would later show that the accident was caused by the vehicle's feathering system deploying too early, due to an error by co-pilot Michael Alsbury, who was killed when the plane broke apart. An investigation by the National Transit Safety Board faulted Scale Composites for not incorporating the possibility of human error into the plane's safety precautions.

At ISPCS, Whitesides was asked what had changed in the company culture since the accident.

"To be honest I think that the culture hasn't changed dramatically," Whitesides said. "I think this was an experience that was new and challenging, particularly for younger employees who had never been through an anomaly. During that time you have to go through the work of recovery, and you have to keep spirits up, and you have to support each other, and you have to do the right thing, even if it's not the easiest thing."

Whitesides said the company saw "a surge in ticket sales" following the accident, "from people who wanted to show their support of this concept and that they were committed to making it happen."

The next iteration of SpaceShipTwo is being built by Virgin Galactic, which now owns the design. This is the first vehicle that Virgin Galactic has built in-house (rather than being manufactured by Scaled Composites). Whitesides said the company has seen a staff increase of "roughly 15 to 20 percent over the past year" (to a total of more than 500 employees at various locations), which he says is "an indication that Virgin Galactic has never been stronger from a human perspective."

If SpaceShipTwo reaches its design potential, the ship will take passengers on a short trip into space, where they can enjoy weightlessness and a stunning view of the Earth from more than 62 miles (100 km) above the surface.

Whitesides was direct about not wanting to release a specific date for when the new space plane will be ready to fly, even in test flights.

"We'll resume flights when we're ready to do so," Whitesides said. "I think it's easy to get wrapped up in timetables, but what I've emphasized to the team is we're going to take the time to build this vehicle. We're getting very, very close now. We're making great progress. But, you know, I don't want to put undue pressure on them by giving them an artificial timeline. They'll finish the vehicle when they can, and hopefully we'll be able to get back into test flight as soon as we can."

Whitesides said the body of the new SpaceShipTwo vehicle is almost complete, and it was recently mated to the carrier aircraft for the first time. (The ship does not leave the runway on its own, but is carried to an altitude of about 50,000 feet by a larger airplane carrier.) Now, he said, the company is integrating various systems on the ship, such as plumbing, electrical, neumatics, avionics and others.

"This is our first vehicle that we're building and we've literally created, I think, a remarkable capability in our operations there where we're able to span the entire range of aerospace design, manufacturing, assembly and test capabilities," Whitesides said.

Whitesides also spoke at ISPCPS about the status of LauncherOne, the company's small satellite launch vehicle.

"It's all about the small sat revolution," Whitesides said. "We've heard a lot about that in this conference, but it really is an inflection point where satellites that used to cost $500 million can now be done with something like a million dollars or dramatically less. And I think LauncherOne will be positioned to capture a lot of that market."

The company recently won a contract from NASA to launch "more than a dozen" small satellites into orbit with LauncherOne, according to a statement on the company website. The NASA flight will take place "just before the start of our routine commercial operations of LauncherOne."

In addition, the company is working with a program called OneWeb, which aims to create a constellation of 648 Earth-orbiting satellites to provide broadband Internet to regions where it is unavailable, as well as increased access for aircraft, according to the company website. Virgin Galactic was one of two founding investors of OneWeb, and Branson sits on the board of directors. Virgin is now contracted to do 39 satellite launches, with an option for 100 more, Whitesides said.

"We think that will be a fantastic anchor customer for our LauncherOne efforts and we're very excited about that," he said.

A collaboration led by Northrup Grumman, Virgin Galactic and Scaled Composites is competing with two other groups for a bid to work on the XS-1, a space plane under development by the Defense Advanced Research Projects Agency (DARPA). Like SpaceShipTwo, the XS-1 would be a low-cost, reusable space vehicle. (DARPA has proposed a goal of making 10 missions in 10 days.) The vehicle is designed to take payloads weighing between 3,000 and 5,000 lbs. (1,360 to 2,267 kilograms) into space for less than $5 million.

At the conclusion of his ISPCS speech, Whitesides again acknowledged the challenging times the company had recently passed through, but emphasized its commitment to "opening up the space frontier."

"Space is not for the faint of heart. And I know a lot of people in this room have been through experiences like we've been through over the past year," Whitesides said. "And what brings us together as a community is that we are willing to, as a community, push the boundaries and push to something that humanity hasn't had before."