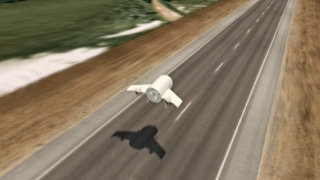 European aerospace company Airbus has revealed its plans to develop rocket engines that fly back to a runway and a reusable upper stage that acts as a space tug — reusability concepts that mirror those being developed by American spaceflight companies SpaceX and United Launch Alliance (ULA).

Airbus has been working on its Advanced Expendable Launcher INnovative engine Economy (Adeline for short) reusable-rocket conceptsince 2010 and wants it to be up and running by 2025. The technology could help enable huge satellite constellations that would require a dramatic increase in the number of launches per year, company representatives have said. [Reusable Rocket Launch Systems: How They Work (Infographic)]

As envisioned, Adeline detaches from its rocket's first-stage fuel tank and re-enters Earth's atmosphere at five times the speed of sound with its engines behind the wings and a heatshield. Once in the atmosphere, Adeline uses its wings to autonomously fly toward a runway and, once at subsonic speeds, uses deployable propellers to power its return to the landing site, where it touches down on skids.

Adeline is being proposed for the planned two-stage Ariane 6 rocket the European Space Agency is paying Airbus to develop. Ariane 6 could be flying in the 2020s. Adeline's engines use liquid fuel, such as kerosene and liquid oxygen, which other rockets also use. According to Airbus, this means Adeline could be used with other rockets.

Airbus is not the only company to propose a reusable propulsion module. In April, ULA announced its Vulcan rocket and the Sensible, Modular, Autonomous Return Technology (SMART) initiative, which will allow Vulcan's main engines to be recovered through air capture.

Airbus has become interested in reusability because it thinks the technology could help increase annual launch rates, which in turn would enable the lofting of enormous satellite networks.

"We have to be ready to increase our cadence capability to increase the tons lifted to space per year, while reducing our costs," Hervé Gilibert, Airbus space systems' chief technical officer, told Space.com. "Payloads in future will be smaller and cheaper. We think we are at the edge of a big evolution of our business. You see in our landscape huge constellations that will need a drastic increase in launches per year."

Airbus isn't the only company thinking this way. For example, SpaceX founder and CEO Elon Musk has spoken of launching a constellation of 4,000 broadband Internet satellites into low-Earth orbit (LEO). A company called OneWeb has plans for a 650-satellite network. Other LEO business proposals since the early 1990s have proposed large numbers of telecommunication and imaging satellites.

Adeline vs. the Falcon 9

Up to 80 percent of a rocket's cost is in its propulsion module, which can also contain the flight-control electronics, according to Airbus representatives. Airbus is predicting 30 percent savings for its reusable system compared to existing rockets, as a result of reduced production costs, Gilibert said.

Airbus claims its concept is more cost-effective than SpaceX's ongoing effort to develop a Falcon 9 rocket with a reusable first stage.

Gilibert also claimed that, with Adeline, Airbus' partially reusable Ariane 6 would have a payload performance that is better than SpaceX's reusable Falcon 9. The first stage of the Falcon 9 releases its upper stage and then descends, engines first, to land vertically using legs that deploy outward from the sides of the stage. (The rocket's upper stage is expendable.)

The Falcon 9 first stage needs 44 tons of propellant to reach a vertical landing site, according to Gilibert, and Adeline does not weigh as much.

"My guess, with a given launcher, is that [Adeline's] impact on payload performance, which for SpaceX is huge because it is a loss of 30 to 50 percent of the mass of the payload for a given orbit — our loss will be much lower," Gilibert said.

However, whereas SpaceXhas been flight-testing its vertical landing system when launching customer payloads — and has twice nearly landed the Falcon 9 first stage on a floating platform in the Atlantic Ocean — Airbus has not yet developed the reusable rocket engine Adeline calls for. The company has made more progress with the deployable propellers, though. [SpaceX Rocket Crashes During Landing Attempt (Video)]

Gilibert said that Airbus patented the deployable propellers up to two years ago, and prototypes were wind-tunnel-tested six to eight months ago.

"The proof of concept has been done. This [deployable propeller] concept is now de-risked," he said.  Airbus engineers have also flown a scale-model version of Adeline for landing tests.

The European Space Agency-funded rockets Ariane 5 and Vega are flown by launch provider Arianespace from a spaceport in French Guiana, in South America. Gilibert said that if Adeline is used with the Ariane 6, that rocket's launch pad will need "very limited adaptations" to make room for the wings.

He also claimed that, because Adeline's engines are protected by the heat shield on re-entry, their condition would be little different than those that have had a ground firing test, which all rocket engines experience prior to launch. As engines must be treated after the test fire to be ready for launch, Gilibert said engineers know what needs to be done, and he is not expecting a "lot of refurbishment" will be required to return Adeline to flight readiness.

The limited work could be carried out at the French Guiana spaceport, he added.

Gilibert said the space tug would be left in orbit by the Ariane 6 and would be used "several times" to take payloads in LEO to a higher orbit. Each time the tug is used, an Ariane 6 second stage would rendezvous to deliver the payload and provide gaseous fuel resupply. Gilibert also suggested that other rockets, not just Ariane 6, could use the tug. Once the tug's operational life comes to an end, it can be sent on a remote exploration mission, Airbus representatives said.