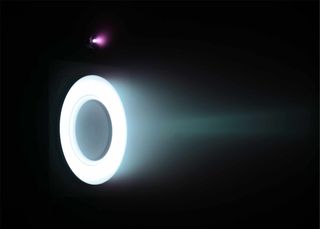 An Aerojet Hall thruster is shown in operation.
(Image: © Aerojet)

Electric vehicles aren't just popular on the ground — it turns out they're all the rage in space these days, too. While still not as common as traditional chemical spacecraft engines, electric engines are growing in popularity for both Earth-orbiting satellites and scientific spacecraft on missions to deep space. And electric engines could turn out to be a key element in NASA's goal of sending people to Mars, experts say.

"The maturity of the various technologies that make up electric propulsion is getting there," said Vlad Hruby, president of the Busek spacecraft engine company. Hruby said he's been waiting for a renaissance in electric spacecraft for about 20 years. "Now it's finally coming to fruition."

In 2012, Boeing introduced an all-electric communications satellite design called the 702SP, which officials say has been popular with commercial clients. In April of this year, satellite builder Orbital Sciences said it's developing its own all-electric model to compete. [Electric Vehicles to Explore Deep Space (Photo Gallery)]

There are two main ways to power an electric spacecraft engine: via solar energy absorbed from the sun, or via nuclear fission. Both have been tested successfully, though solar electric propulsion is the most commonly used.

"The solar array power is getting cheaper per watt, getting more efficient," Hruby told SPACE.com. "A bunch of factors are converging to finally make it the preferred method." [Related: Electric Cars on Earth & Mars: How They Stack Up]

Electric spacecraft engines have been flying in various forms for decades. In the 1970s, the Soviet Union pioneered Hall thruster technology, which remains the most common type of electric spacecraft engine. Hall thrusters use electric and magnetic fields to convert neutral atoms in a propellant into charged atoms, called ions, and then accelerate the ions to produce thrust.

"You have an electrical grid held at a certain voltage," explained Nathaniel Fisch, head of the Hall Thruster Experiment project at the Princeton Plasma Physics Laboratory in Princeton, N.J. "You form a plasma and accelerate the ions in the plasma. Then the ions would be ejected at the voltage you put between the grid and the plasma."

This type of engine tends to be much more fuel-efficient than a typical chemical rocket engine, which uses the energy created by chemical reactions between two chemicals — a fuel and an oxidizer — to create thrust.

"Electric propulsion is the most efficient propulsion approach that we know about right now," said Christian Carpenter, a space architect in the Exploration Systems department of the rocket engine company Aerojet. "It generally has two or more times savings in propellant — that's demonstrated."

Saving all that propellant means that electric spacecraft can weigh a lot less than chemical spacecraft. That mass savings means the same satellite can be launched on a smaller, cheaper rocket, or that the extra mass could be used to add more instruments to the spacecraft, such as adding extra transponders to communications satellites.

The downside is that this fuel efficiency comes often comes at the expense of thrust power, so electrically propelled spacecraft accelerate slower and take longer to reach the same destination. (They could be designed to produce the same thrust as chemical engines, but would then require more power than current solar arrays are able to provide.)

"The way we think about it is that your fuel efficiency works on getting your vehicle mass down at the expense of your thrust dropping, which means longer trip times," Carpenter said. "There's a balance between reducing the mass and increasing the trip time. It's up to the architect of the system to figure out the right balance."

This balance is one of the key questions NASA is facing in contemplating sending people to an asteroid and then on to Mars by the mid 2030s — a goal laid out by President Barack Obama.

Carpenter and others recently advocated a combination of chemical and electric propulsion for a manned Mars mission at the Humans 2 Mars Summit May 7 in Washington, D.C. Chemical engines could be used to propel a crew to the Red Planet in about six months, Carpenter said, but the habitat, supplies and equipment they need could be sent on an electric cargo craft ahead of time, in a trip that would probably take about two and a half years.

"People need to be able to get to their destination in a reasonable amount of time," he said. "They want to be out doing their mission, not riding to it. Chemical engines provide high thrusts, but it's not the most fuel-efficient way to do it."

In contrast, solar electric propulsion, for instance, might be perfect for the unmanned cargo mission. "For cargo, you can take your time and you can do things efficiently," Carpenter said. "We're interested in all the options. There's really not one silver bullet technology for going to Mars — it's a portfolio."

In the long run, he said, nuclear-powered electric engines may prove among the best options for getting to Mars, but that technology isn't ready yet. Currently, the equipment to conduct nuclear fission is too massive, and requires hydrogen fuel, which is difficult to store for long periods, Carpenter said. A viable nuclear-powered spacecraft has not yet been flown.

"Longer term, the nuclear rockets provide about twice the fuel economy of a chemical engine but the same or higher thrust," Carpenter said. "You can still get there fast, but use half as much fuel. We think out on the horizon, nuclear will ultimately be the best crew delivery system."