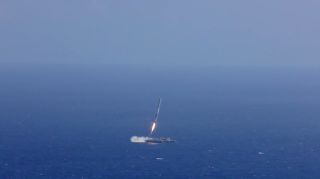 The first stage of SpaceX's Falcon 9 rocket attempts to land on a robotic ship on April 14, 2015, shortly after sending the company's Dragon cargo capsule to orbit.
(Image: © SpaceX)

Those of you who wanted to see the explosive last seconds of SpaceX's daring rocket-landing attempt Tuesday (April 14) are in luck.

A new video shows the first stage of SpaceX's Falcon 9 rocket crashing and burning after nearly pulling off an unprecedented touchdown on an unmanned "drone ship" in the Atlantic Ocean. The booster stage attempted the landing after successfully launching SpaceX's robotic Dragon capsule toward the International Space Station on a cargo mission for NASA.

The footage was captured by a chase plane monitoring the landing attempt. SpaceX released the video on Wednesday (April 15), one day after the company unveiled a greenier, grainier and shorter version that stopped just when the rocket stage was about to topple over and explode.

Tuesday's attempt marked SpaceX's second rocket-landing near-miss in the last three months: A Falcon 9 first stage also exploded on the deck of the drone ship, which is named "Just Read the Instructions" after a vessel in the novels of sci-fi author Iain M. Banks, during the last Dragon launch, on Jan. 10.

The tests are part of SpaceX's effort to develop fully and rapidly reusable rockets. Such technology would dramatically cut the cost of spaceflight, SpaceX founder and CEO Elon Musk has said.

SpaceX will try the drone-ship landing again during the next Dragon launch, which is currently scheduled for June 19. (The company holds a $1.6 billion NASA contract to fly at least 12 cargo missions to the space station using Dragon and the Falcon 9; Tuesday's liftoff kicked off the sixth of these flights.)

The touchdowns won't always be on "Just Read the Instructions" or another floating platform; SpaceX eventually aims to return its rockets to Earth on land near their launch site, so they can be reflown quickly and efficiently.