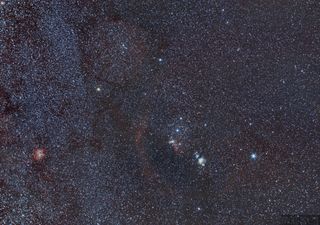 Ángel Arós submitted an image of Orion constellation to the Celestron "Change Your View" contest in November 2015.
(Image: © Ángel Arós)

If you took a great photo of a night-sky sight, why not share it with the world?

California-based optics manufacturer Celestron is holding a monthly photo competition called "Change Your View," and the company is always looking for more entries. To participate, simply tag your photos with #ChangeYourView2015 when you post them on Twitter, Facebook or Instagram.

Celestron is choosing winners every month, so your stunning shot could even score some free swag. To learn more about the contest, visit the Change Your View site.

Here's a sample of some photos that skywatchers have already sent in:

Richard Keele contributed a photo of the Cone Nebula, NGC 2264, to the Celestron "Change Your View" contest.

Instagram user "oede_lagt" submitted a photo to the Celestron "Change Your View” contest, writing: "Proof that the Island of Bornholm, the pearl of the Baltic Ocean, is truly a beautiful piece of nature, even at night."

Ángel Arós submitted an image of Orion constellation to the Celestron "Change Your View" contest in November 2015.

Hudson Hallenbeck submitted this moon photo to the Celestron "Change Your View" contest in November 2015.

An Instagram user going by "swtc" posted a photo of the moon for the Celestron Change Your View contest in November 2015.

Astrophotographer Peter Chiapperino tagged this photo taken at Hapuna Beach, Hawaii, with the hashtag #changeyourview2015 for entry into the Celestron contest.

Astrophotographer Allan Der submitted a composite image of the lunar eclipse of September 2015.

An astrophotographer going by the name of "dakotaa.h" submitted a photo of the moon and wrote on Instagram: "New telescope came and I'm loving the views. My new telescope is a Celestron CPC 11-inch. I took the photo using the prime focus of the telescope and my DSLR camera."

Astrophotographer Linda Bunnell sent in a photo of the moon in morning light tagged with #buckscounty and #lakegalena (in Pennsylvania) on Instagram, Nov. 1, 2015.

Instagram user "seandavies519" submitted this moon photo to the Celestron "Change Your View" contest on Nov. 2, 2015.

This amazing photo of a lunar eclipse was taken by Bryan Cogdell using a Celestron 6" Schmidt-Cassegrain and AVX mount.

A crescent moon (and somehow, apparently, a dragon) over Redondo Beach Pier in Southern California.

This shot of the moon was taken using Celestron's NexStar 6 Evo telescope and the Smartphone Adapter for Ultima Duo 21, with the iPhone 6 Plus. The Camera+ app was used to better control focus and exposure, Celestron representatives said.