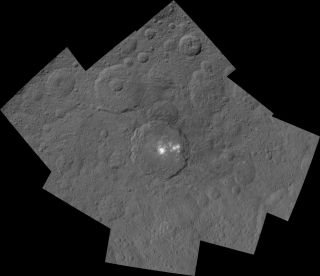 NASA's Dawn spacecraft has begun the long journey to its final orbit around the dwarf planet Ceres.

The probe fired up its thrusters on Friday (Oct. 23) and began spiraling down to an orbit that lies just 230 miles (375 kilometers) from the surface of Ceres, the largest object in the main asteroid belt, located between Mars and Jupiter.

Dawn's ion engines are very efficient but generate low levels of thrust, so the trip will take a while. The probe should begin collecting data and capturing photos from the new orbit in mid-December, NASA officials said.

Dawn "will record spectra of neutrons, gamma-rays, and visible and infrared light; measure the distribution of mass inside Ceres; and take pictures" from this orbit, Dawn Mission Director and Chief Engineer Marc Rayman, who's based at NASA's Jet Propulsion Laboratory in Pasadena, California, wrote in a blog post last month. "Then, when it exhausts its supply of hydrazine [fuel for orientation and attitude control] next year, as it surely will, the mission will end."

Dawn has been getting closer and closer to Ceres since arriving at the dwarf planet this past March. The spacecraft's first science orbit lay about 8,400 miles (13,500 km) from Ceres, and the second featured an altitude of 2,700 miles (4,400 km). The third orbit, from which Dawn just departed, was 915 miles (1,470 km) from the dwarf planet's surface.

The fourth and final orbit will provide the best views of Ceres to date, and could help mission scientists solve some mysteries about the 590-mile-wide (950 km) world — including, perhaps, the nature of the dwarf planet's strange bright spots.

Dawn orbited Vesta from July 2011 until September 2012, when the probe departed for Ceres. The spacecraft is the first ever to orbit a dwarf planet, as well as the first to circle two celestial objects beyond the Earth-moon system.