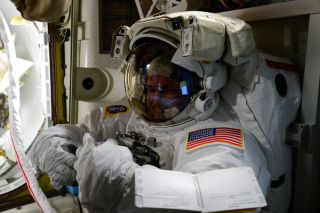 NASA astronaut Scott Kelly is seen in his NASA spacesuit on the International Space Station on Oct. 27, 2015 ahead of his first spacewalk on Oct. 28 with crewmate Kjell Lindgren, also of NASA.
(Image: © NASA via Scott Kelly/@StationCDRKelly)

Two NASA astronauts will take the first spacewalk of their careers today (Oct. 28) and you can watch their orbital debut live online as it happens.

American astronauts Scott Kelly and Kjell Lindgren plan to spend nearly six-and-a-half hours working outside the International Space Station during their spacewalk, which will be dedicated to "station upgrades and maintenance tasks," according to NASA. The spacewalk is slated to begin at 8:10 a.m. EDT (1210 GMT), but NASA's webcast of the event will begin earlier at 6:30 a.m. EDT (1030 GMT).

You can watch the spacewalk webcast live on Space.com, courtesy of NASA TV.

Both Kelly and Lindgren have said they are excited for today's spacewalk, which will include (among other tasks) the installation of a protective cover on the Alpha Magnetic Spectrometer, a $2 billion particle physics detector that has been performing science on the station's exterior since 2011. On Tuesday, Kelly posted a photo of himself clad in his NASA-issue spacesuit in preparation for today's excursion.

"Getting my game face on for #spacewalk," Kelly wrote on Twitter, where he posts as @StationCDRKelly.

Not to be outdone, Lindgren recorded a time-lapse video of his tool belt prep work and posted to his own Twitter feed @astro_kjell.

"Preparing my space suit tool belt for tomorrow's spacewalk," Lindgren wrote Tuesday. "I wonder how Batman goes through this process." Take a look at Lindgren's video and be amazed here:

Kelly and Lindgren are part of the six-man Expedition 45 crew currently living aboard the International Space Station. Kelly, who is in the middle of a one-year spaceflight, is commanding the mission. Russian cosmonauts Sergey Volkov, Mikhail Kornienko, Oleg Kononenko and Japanese astronaut Kimiya Yui round out the crew. Kornienko is also flying the one-year mission with Kelly.

Visit Space.com later today for complete coverage of today's spacewalk and a final wrap up of the day's orbital activities by late afternoon.