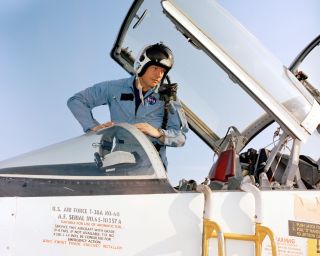 Apollo 11 commander Neil Armstrong arrives at Patrick Air Force Base (AFB) on June 17, 1969, from Ellington AFB. Deke Slayton was in the second seat on the flight from Houston. Armstrong had flown the Lunar Landing Training Vehicle (LLTV) twice the day before at Ellington, bringing it to three hundred feet before practicing powered descents to the moon. All three crewmen spent time in the Kennedy Space Center (KSC) simulators on June 17. That eve¬ning, after the day’s flight readiness review, Apollo Program Director Sam Phillips announced that the launch was on for July 16.
(Image: © NASA)

John Bisney, a space journalist, is co-author with J.L. Pickering of "Spaceshots and Snapshots of Projects Mercury and Gemini" and "Moonshots and Snapshots of Project Apollo" (University of New Mexico Press, 2015), a history of the first 15 years of the U.S. manned spaceflight program told through hundreds of rarely-seen or newly-published photographs. The authors contributed this article to Space.com's Expert Voices: Op-Ed & Insights.

Is there anyone who hasn't seen the iconic picture of Apollo 11 astronaut Buzz Aldrin standing on the moon ? Or the equally famous Earthrise photo taken from lunar orbit by the Apollo 8 crew? They are justly famous because both are dramatic images that document two of the greatest moments in exploration: the first time humans left our planet behind, and the first time humans walked on another celestial body.

Such images are so historic, in fact, that it's nearly impossible to find a book about space exploration that doesn't include them. And while there's nothing wrong with that — or with using any of the perhaps 200 other "greatest hits" pictures from the U.S. manned space program — for decades readers have been deprived of a much deeper look at that effort, ironically because the more famous photos are … well, more famous.

That reluctance by book authors and editors to go beyond easily accessible photos has limited the exposure of more rarely seen images, crowding them out. As a result, space photo archivist J.L. Pickering and I both realized something was wrong — that the public was missing out on seeing tens of thousands of other images that had simply been filed away and forgotten, languishing in NASA archives.

These photos, filled with far more than astronauts and spacecraft, are just as important to the nation's understanding and appreciation of what the country accomplished as their more famous counterparts. They reveal the men and women behind the successes and failures of the early U.S. manned space program. We see their emotions, their workplaces, and glimpses of their everyday lives and culture on the job. We gain a much deeper knowledge of their procedures. These were historically significant moments in a time that would never be repeated — but they were locked away.

This state of affairs was nothing new for J.L., who, as a high school student 42 years ago, had begun to suspect other images were out there. His first score, in 1973, was an 8 by 10 glossy of Apollo 15 astronaut Jim Irwin, which was shot during his training. The photo arrived in the mail after a barrage of letters he sent to a Florida tourist publication that used the image (the publication caught his eye because it used seldom-seen NASA images).

After he confirmed his hunch by visiting NASA headquarters in Washington a couple of years later, he continued his decades-long quest to track down as many of these "lost" photos as possible. And while his collection currently numbers upward of 125,000 images (both prints and scans), we believe at least twice that many are still inaccessible in government repositories.

What is the status of these photos? The negatives should still exist — most now reside at Archives II, a "Raiders of the Lost Ark"-like warehouse in College Park, Maryland. (The negatives of the most valuable manned-space images — the in-flight shots — are in cold storage in a special vault at the Johnson Space Center (JSC) in Houston; we have been inside!)

But significant collections of "on-the ground" photos are also maintained at JSC and the Kennedy Space Center (KSC) in Florida, both in negative and print formats. So hopefully, at least they are being preserved in some way or another. NASA, however, simply does not have the time, resources, nor possibly interest to digitize its vast photo archives and post the images online. And if a tree falls in a forest and no one can see it, what's the value? That's where dedicated space historians like J.L. try to step in, albeit with mixed results.

Happily, he managed to penetrate the back rooms of both centers before losing access. This success followed years of schmoozing and was based on unofficial personal relationships. But things have changed since then. At both centers, sympathetic staff members in the photo offices have retired or were let go. Former Apollo astronauts have tried to intervene, but with no luck.

J.L. has drawn from other sources as well. During the 1980s and 1990s, he visited with many retired NASA employee and contractor photographers and managers who often had images to provide. The advent of online auctions and collector websites such as eBay have also provided material. [Space History Images]

In the public eye

The primary goal of both volumes is to offer readers hundreds of unusual behind-the-scenes images, but we soon realized another accomplishment: No previous space photography books had ever devoted a full chapter to each manned mission.

Since modern digital scanners and software can repair vintage photos, J.L. removes imperfections and corrects color when appropriate. Many of the images now in his collection had previously been stored in an unfriendly environment that damaged them; this was particularly true of transparencies and negatives. A good scanner can touch up photographs in ways that were once unimaginable, restoring pictures that might have been considered to be unusable. From conversations with colleagues, J.L. knows that the restoration of vintage images can be controversial. His approach, however, is pragmatic and conservative: He only makes adjustments in a manner he judges to be as faithful as possible to the original. Today, his collection serves as a photo resource for authors, museums, astronauts and others.

A wonderful byproduct of meeting so many people associated with the U.S. space program has been making new friends and listening to their recollections. For space enthusiasts like us, it really doesn't get much better than this: sitting down with someone like the late Paul Donnelly, Apollo launch operations manager, while he pulled out some photos and reminisced. Some of these conversations were included in our captions — one of the unusual aspects of the books.

Rather than offering brief information to accompany each photo, I researched the depicted event, combed through NASA and contractor documents and searched online newspaper archives to provide many more details about the context of the image.

We also wanted to identify as many of the nonastronauts in each picture as possible and give them credit, since most were nameless NASA, contractor or military personnel in the original caption information. The rank-and-file space workers on the ground were critical to the success of the program, and the survival of the crewmen.

We hope our enthusiasm for this era of U.S. manned spaceflight is apparent in these books — but we also hope the images inspire the release of many more gems that might someday, somehow emerge from NASA's backrooms.