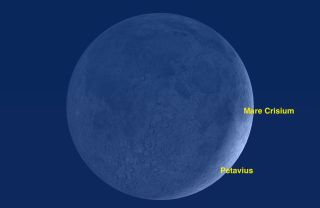 Starting with the waxing crescent moon tonight (Sept. 16), skywatchers with binoculars or small telescopes can spot the moon's geographic features in vivid detail. Here's how, and what to look out for.

Over the course of the month, the moon cycles through new moon, to first quarter, to full moon, to last quarter and back to new. At new moon, the moon is usually too close to be seen except when it passes in front of the sun, as happened in the eclipse this month on Sept. 13. At full moon, the sun is directly overhead at the moon's center, and trying to observe the moon is like being in the desert at high noon.

The best time to observe the moon with binoculars or a small telescope is during the first quarter: about halfway between new moon and full moon, when the sunlight is coming directly from the side and details along the terminator (the line between sunlight and shadow) are cast in high relief by the rising or setting sun. That will fall on Monday (Sept. 21) at 4:59 a.m. EDT, so the best time to view the moon will be around this date. Starting tonight (Sept. 16), check out the moon each night this week to watch it grow from a fingernail crescent through the half-lit first quarter, continuing toward full moon on Sept. 27.

If you look at the moon tonight, you will see what is called a waxing crescent moon. The moon is three days past new moon and four days short of first quarter. Twelve percent of its visible surface is lit by the sun, still well behind the moon, and the other 88 percent is lit by sunlight reflected off the Earth, called earthshine or earthlight. Look for the ghostly Earth-lit moon to the left of the bright crescent. [The 10 Coolest Moon Discoveries ]

With binoculars you can easily see the oval shape of the Mare Crisium, the "Sea of Crises." This huge basin, caused by the impact of a small asteroid early in the moon's history, is actually almost a perfect circle; it only appears oval because we're looking at it around the edge of the moon. It is about the same size as Great Britain. Look below this for the large crater Petavius, 110 miles (177 kilometer) in diameter, with a striking central peak and two prominent rilles inside it. (Rilles are grooves or channels on the moon's surface, which are thought to be caused by the collapse of surface material into a hollow lava tube just below the surface.)

There is a wealth of other surface details in the first-quarter moon to observe with binoculars or a small telescope, as well. The northern half of the disk is dominated by the two huge plains, named the Mare Serenitatis ("Sea of Serenity") and the Mare Tranquillitatis ("Sea of Tranquility"). The latter is where the Apollo 11 astronauts landed on July 20, 1969. On the north "shore" of the Mare Serenitatis lies the crater Posidonius, 60 miles (95 km) across, with many interesting features on its floor: a small crater, a mountain range and a system of rilles. Farther north is the crater Aristoteles, 54 miles (87 km) in diameter.

The southern half of the first-quarter moon is mountainous and pockmarked by hundreds of craters. Look especially for the trio of Theophilus, Cyrillus and Catharina. Farther south, Maurolycus dominates a vast complex of craters.

Many of these craters are large enough to be visible in binoculars, and all are easily seen in even the smallest of telescopes.

If you look closely at the two illustrations with this article, you will notice that the moon on Sept. 20 is slightly larger than the moon on Sept. 16. This slight change in size is due to the elliptical shape of the moon's orbit. The moon is heading toward perigee, the point in its orbit where it is closest to the Earth. This will occur Sept. 27 at 10 p.m. EDT, when the moon will be 221,753 miles (356,877 km) from the Earth, its closest distance in 2015. You can't see the difference, but some people are making a lot of noise about this this so-called "supermoon."

Editor's note: If you capture an amazing view of the moon that you'd like to share with Space.com, send in photos and comments to managing editor Tariq Malik at: spacephotos@space.com.