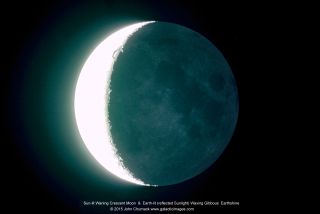 The crescent moon lit up by earthshine was captured by astrophotographer John Chumack on Sept. 8, 2015.
(Image: © John Chumack | www.galacticimages.com )

As the sun sets, our own planet can light up the moon and produce an ashen glow.

The crescent moon lit up by earthshine was captured by astrophotographer John Chumack on Sept. 8. "That pale glow on the unlit part of a crescent moon is light reflected from Earth, also known as earthshine," Chumack wrote in an email to Space.com.

If you look at a crescent moon just after sunset or right before the sunrise, you can spot not only the familiar crescent shape, but also the rest of the glowing orb as a dark disk. [Amazing Lunar Eclipse Photos of 2015]

Editor's note: If you capture an amazing image of the night sky that you would like to share with Space.com and its news partners for a story or photo gallery, send photos and comments in to: spacephotos@space.com.