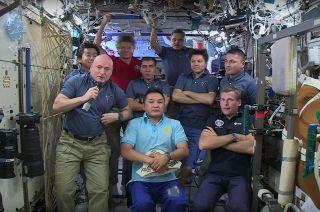 HOUSTON — If Scott Kelly were on a spaceship heading out to Mars — rather than on board the International Space Station, where he has been for the last 6 months — he would be arriving at the Red Planet just about now.

Instead, Kelly and his eight crewmates — astronauts and cosmonauts from five different nations — took time out of their day circling the Earth on Tuesday (Sept. 8) to talk to reporters about life on board the outpost and what a trip to Mars might be like for those in the future.

"I think for the folks who go to Mars — especially the first ones — it is going to be such an incredible destination and event that they are going to be really psyched up getting there," stated Kelly, reflecting on the differences between reaching the midway point of his almost yearlong mission and the 6 months it will take future astronauts to reach the fourth planet from the sun. [5 Manned Mission to Mars Ideas]

"I am not saying I am not psyched up for the rest of this, [but] in some ways, almost being halfway through, a lot of what we are going to [do for the remainder of the mission] is very similar to what we have already done," he added.

Kelly, who took over command of the station's Expedition 45 crew on Saturday (Sept. 5), launched to the outpost in March along with Russian cosmonauts Mikhail Kornienko and Gennady Padalka. Like Kelly, Kornienko is set to stay aboard the orbiting laboratory until March 2016, gathering medical data in support of future crewed missions deeper into the solar system, including to Mars.

Padalka, meanwhile, is set to return to Earth on Friday (Sept. 11), landing together with Danish astronaut Andreas Mogensen and Kazakh cosmonaut Aidyn Aimbetov, who arrived on the space station just one week ago. When he lands, Padalka will have logged a record-setting 878 days in space over the course of his five missions — more than enough time to have flown out to Mars, spent a year and a half on its surface, and then returned to Earth.

"We have a person who has been here the whole time that is getting ready to leave — Gennady — and that obviously wouldn't happen on Mars. So that [too] makes it a little bit different, with people coming and going," Kelly observed. "So I think it is hard to compare the two experiences."

"But man, I'm excited for the folks who get to go to Mars," he added.

For now, Kelly and his space station crewmates, including fellow NASA astronaut Kjell Lindgren, may have to make do with fictional voyages to Mars like the one depicted in the upcoming 20th Century Fox film, "The Martian." Kelly and Lindgren recently called down from space to chat with the movie's star, Matt Damon, while the actor was touring NASA's Jet Propulsion Laboratory (JPL) in Pasadena, California.

"It was certainly fun for us, and from a picture of [Damon] at JPL, it looks like he was having fun as well," Lindgren said. "It is neat to think about the trip we'll have to Mars."

Lindgren said that both he and Kelly had read and enjoyed author Andy Weir's book, on which the Ridley Scott film is based, and they were looking forward to seeing the movie when it opens in theaters on Oct. 2.

"We're hopeful for a copy up here, either on the day of the release or soon thereafter," Lindgren said.

Mogensen, who will be on Earth by the time "The Martian" premieres, said that sometimes movies can be so realistic today that they can detract from part of the experience of first flying into space.

"I remember thinking that maybe our movie industry has ruined the moment a little because they are so good now at making high-definition IMAX movies," Mogensen said. "You can actually go to a good cinema [film] that is very, very close to what we see."

But on the other hand, the European Space Agency (ESA) astronaut said, life aboard the International Space Station is so unique that it is "almost impossible to imagine what it is going to be like until you get up here."

"What's really incredible for me is a sense of being aboard this gigantic spaceship that is slowly circling the Earth," said Mogensen, recalling the hum of the station's fans as he gazed down at the world below. "It just reminds you of being aboard the Starship Enterprise and arriving at a new planet and, yeah, about to explore this new planet. So it is [a] really cool feeling."

Watch astronauts and cosmonauts on the International Space Station reply to reporters on collectSPACE.com.