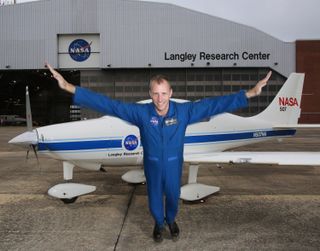 Call all fans of flight! According to NASA, it's National Aviation Day today (Aug. 19) and the space agency wants you to celebrate the technological marvel that is flight with a photo social media campaign.

National Aviation Day celebrates the birthday of Orville Wright, who along with his brother Wilbur pioneered the era of powered flight. It was designated a National Day in 1939 by President Franklin D. Roosevelt. NASA's ties with aviation date back 100 years to the agency's origins as the National Advisory Committee for Aeronautics, which was founded in 1915. In, fact, the first "A" in "NASA" stands for Aeronautics. NASA's full name is the National Aeronautics and Space Administration. [Related: The 10 Most Amazing Flying Machines Ever]

To celebrate that aviation legacy, NASA is urging members of the public to snap photos of themselves with their arms spread wide like the wings of an airplane (it's National Aviation Day, after all) and post them on social media using the hashtags #SpreadYourWings and #NationalAviationDay. You can see NASA's guide to the National Aviation Day celebration here. The space agency plans to pick its favorite photos from the public and post them online at http://www.nasa.gov/aeronautics on Thursday, Aug. 20.

"Why is NASA celebrating National Aviation Day? Because we love everything about flight, whether it's through space or Earth's atmosphere," NASA officials wrote in a statement. They also put together a list of NASA's 10 Favorite Ways to Celebrate National Aviation Day as well.

"We've helped air travel become a safe, reliable form of transportation," NASA officials said. "But we're not finished. We're working to transform aviation into something even better by perfecting new technologies, including those that could lead to shape-shifting wings, electric propulsion and the return of commercial supersonic flight."

"Every U.S. commercial aircraft and every U.S. air traffic control tower has NASA-developed technology on board," NASA officials said. "So, remember -- NASA is with you when you fly!"