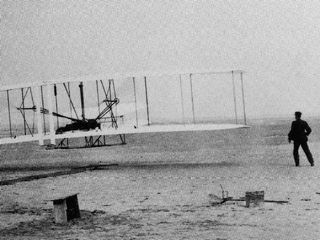 The first flight by the Wright Brothers.
(Image: © NASA)

The Wright Flyer, which made its first flight in 1903, was the first crewed, powered, heavier-than-air and (to some degree) controlled flying machine. It was hard to imagine back then that a few wobbly flights would lead to an international aviation industry, not to mention the first human spaceflight just 58 years later, in 1961.

Wilbur and Orville Wright played with a toy rubber-powered flyer as children and flew kites, spurring their inspiration for flight early in life. Their eventual first flight at Kitty Hawk, North Carolina, relied upon innovations in flight control and self-propulsion — both necessary for the aircraft to stay aloft without crashing during its first successful flight tests, on Dec. 17, 1903.

The birth of the Wright brothers' serious interest in flight began with the death of glider pioneer Otto Lilienthal in 1896, according to the Smithsonian National Air and Space Museum. Like Lilienthal, the brothers experimented with kite and glider designs to build up to the first aircraft.

Past glider pilots had steered their gliders by shifting around their body weight. But the Wright brothers came up with a more elegant solution; they twisted or warped the aircraft's wingtips in opposite directions to affect the airflow over the wings. That twist created different amounts of lift on each wing so that the aircraft would tilt toward one side.The pilot controlled the warping of the Wright Flyer's wing tips using wires connected to a hip cradle. That meant the pilot could steer by sliding his hips from side to side.

Wind-tunnel tests in the fall of 1901 and hundreds of gliding tests in 1902 led to an aircraft design with better lift, a forward elevator to pitch its nose up or down, and a vertical tail rudder for more effective flight control. Such improvements set the stage for the flying machine that would achieve sustained flight in 1903.

Making a flying machine that could do more than glide required the Wright brothers to invent the first working aircraft propellers. They envisioned the propeller as an aircraft wing placed on its side and spun around to create the air flow for horizontal "lift," the force needed to move an aircraft forward.

The Wright brothers built a 12-horsepower engine to power two propellers mounted behind the wings of their 1903 Flyer. A chain-and-sprocket transmission system connected the engine to the propellers so that it could turn them.

The sky's the limit

The Wright Flyer made its historic, 12-second flight on Dec. 17, before flying again three more times and covering a distance of 852 feet (255.6 m) in 59 seconds on the fourth and final flight. The age of powered flight had begun.

The milestones of flight since 1903 are too numerous to list in a short article, but some of the major ones (according to Air & Space Smithsonian) include the first carrier ship landing, in 1911; the first aerial refueling, in 1923; the first transatlantic plane crossing by a team, in 1919 (Charles Lindbergh did the first solo one, in 1927); the first instrument-only flight, in 1929; and the first flight to break the sound barrier, in 1947. Since then, airplanes have (in general) become safer, quieter and more fuel-efficient, and today, advanced drones fly dangerous warfare missions or during natural disasters.

The Space Age began in 1957, with the launch of Sputnik, followed by the 1961 mission that made Yuri Gagarin the first human in space. Spaceflight today is by no means as routine as airplane flights, but that's not to say this won't someday happen. Over just a matter of decades, astronauts have accumulated experience in performing complex spacewalks, doing science aboard the International Space Station, and living in space for a year or more at a time.

This article was updated on June 17, 2019 by Space.com contributor Elizabeth Howell.