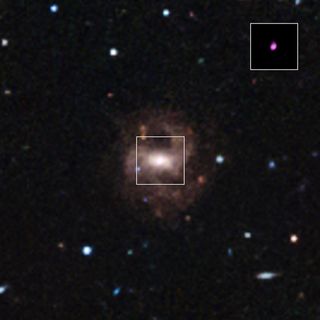 This image shows the optical view of RGG 118, captured by the Clay Telescope, and the X-ray view of the black hole, taken by NASA's Chandra spacecraft.
(Image: © NASA)

The smallest supermassive black hole ever identified is gobbling material at rates similar to its larger cousins, providing insights into how these behemoths evolve.

Located at the heart of a dwarf galaxy known as RGG 118, the black hole contains about 50,000 times more mass than the sun. It's therefore less than half as heavy as the second-smallest known supermassive black hole, researchers said. A NASA video on the small black hole explains the discovery.

"It might sound contradictory, but finding such a small, large black hole is very important," lead author Vivienne Baldassare, a doctoral student at the University of Michigan (UM) in Ann Arbor, said in a statement. "We can use observations of the lightest supermassive black holes to better understand how black holes of different sizes grow." [‪Images: Black Holes of the Universe]

There are two types of black hole — stellar mass and supermassive. Stellar-mass black holes weigh a few times as much as the sun and form after the collapse of huge stars. Supermassive black holes reside at the center of most, if not all, galaxies and are thought to evolve and grow along with the collection of stars they inhabit.

RGG 118 is located about 340 million light-years from Earth; the dwarf galaxy was originally identified by the Sloan Digital Sky Survey. Baldassare and her colleagues were able to determine the mass of RGG 118's central black hole by studying the motion of gas near the galaxy's center with the 21-foot (6.5 meters) Clay Telescope in Chile.

At 50,000 solar masses, the black hole is quite a lightweight. For example, the Milky Way galaxy's central supermassive black hole is about 100 times more massive. The heaviest known black holes weigh about 200,000 times as much as the one in RGG 118.

"In a sense, it's a teeny supermassive black hole," said co-author Elena Gallo of UM in another statement.

The team also used NASA's Chandra X-ray Observatory to measure the X-ray brightness of RGG 118's hot gas, which allowed them to calculate how quickly the black hole is gobbling up material. The scientists found that RGG 118 is consuming material at about 1 percent the maximum rate — similar to that of other, larger supermassive black holes.

"This little supermassive black hole behaves very much like its bigger, and in some cases much bigger, cousins," said study co-author Amy Reines, also of UM. "This tells us black holes grow in a similar way, no matter what their size."

"This black hole in RGG 118 is serving as a proxy for those in the very early universe, and ultimately may help us decide which of the two [ideas] is right," Gallo said.

Active black holeshelp shape how their galaxies grow and evolve, regulating temperature and the movement of the gas and dust that grow into stars. The small size of RGG 118's black hole indicates that the dwarf galaxy has likely never endured a mergerwith a neighbor — the process by which larger galaxies are thought to grow, researchers said.

"These little galaxies can serve as analogs to galaxies in the earlier universe," Baldassare said. "By studying how galaxies like this one are growing and feeding their black holes and how the two are influencing each other, we could gain a better understanding of how galaxies were forming in the early universe."

The research, which included a fourth author, Jenny Greene of Princeton University, is available online in the Astrophysical Journal Letters.