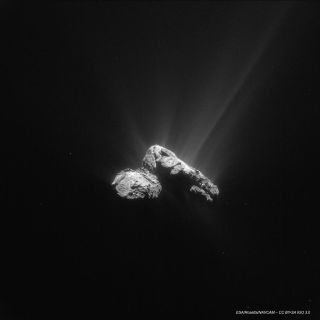 After more than a year in orbit around a comet, the European Rosetta spacecraft and its icy dance partner are hitting a huge milestone: their closest approach to the sun.

The Rosetta and its target, Comet 67P/Churyumov–Gerasimenko, reach perihelion today (Aug. 13), when the comet's 6.5-year orbit brings it within 114.9 million miles (185 million kilometers) of the sun.

Activity is already exploding on Comet 67P. In late July, Rosetta's camera caught a jet eruptingin the space of less than half an hour. And because it takes about a month for the comet to get its warmest, this means that activity is expected to peak in a few short weeks. [See more amazing comet photos by Rosetta]

"The key to the Rosetta mission is that it is there for the long haul. It is there to watch and observe changes in the comet over time, with the same suite of instruments, as opposed to a flyby — or maybe different missions having flybys at different times with different instruments," said Joel Parker, an interdisciplinary scientist on the mission. He is a research astronomer and director at the Southwest Research Institute in San Antonio, Texas.

Rosetta arrived in orbit around Comet 67P on Aug. 6, 2014, nearly 10 years after launching into space. In November of last year, the orbiter's small Philae lander touched down on the comet to study the object's surface.

"This is creating the baselines for all future study of comet activity for us to understand what is going on at the small scale, that cannot be observed from Earth or near-Earth observations," Parker told Space.com.

Among other things, researchers will learn about how the brightness of a comet increases, which could lead to better predictions for amateur astronomers, he said. Researchers will also look at how the composition of the comet's emissions (dust and gas) change, which will provide clues about what the early universe looked like.

How the solar system was

Comets such as 67P are considered chunks of what the solar system appeared to be early in its formation, before the planets and moons were formed. Studying comets and asteroids therefore helps researchers understand the makeup of the young solar system shortly after its formation 4.5 billion years ago.

Rosetta is the first spacecraft to orbit a comet and also the first to drop a small probe, the Philae comet lander, on a comet's surface. Among other findings, the Rosetta mission revealed that the type of water on the comet is different than that of Earth, meaning that comets like 67P could not have delivered water to this planet. The spacecraft also detected organics, a building block to life on Earth, and possibly across the universe.

There has been some discussion (and dispute) among the Rosetta researchers as to whether the comet's outgassing will change as the object gets closer to the sun, said Paul Weissman, another Rosetta interdisciplinary scientist who recently retired from NASA's Jet Propulsion Laboratory in California.

Solar heating could unveil deeper regions of the comet that were untouched for millions or billions of years, depending on how much bled away when 67P passed by the sun previously.

"This comet has this unusual … ratio" of the constituents of hydrogen in water, specifically the ratio of a rarer type of hydrogen, called deuterium, to hydrogen, Weissman said. "We're curious to see if that changes as it goes around the sun and as it gets more active.

It is notoriously difficult for even professional astronomers to predict how bright a comet will appear when it swings by Earth. This is because it's difficult to see the nucleus (heart) of the comet, Parker said, so measurements are made from observing the comet or atmosphere. [Surprising Comet Discoveries by Rosetta and Philae (Infographic)]

As Rosetta observes 67P from up close, the spacecraft will see how much gas is coming out, what dust the gas is dragging out and how big the gas particles are, Parker said. Weissman added that these particles could be a centimeter (0.4 inches) across or larger, which is big enough for the comet's imaging instruments to resolve the individual particles and potentially, track their movements.

The team will also be observing how the solar wind, the constant stream of gas from the sun, interacts with the comet's surface and causes changes, Weissman said. The researchers will additionally watch how the coma of the comet - the dusty envelope around its nucleus - flexes when the solar wind hits it.

Rosetta's current mission ends on Sept. 30, 2016, when the mission will be operating at about four astronomical units or AU from Earth. (One astronomical unit is the Earth-sun distance, about 93 million miles or 150 million km.) At that point, the spacecraft will be so far from the sun that it will be difficult for its solar panels to collect the energy required to continue operating, so further work after that is unlikely, Weissman said.

Editor's note: The European Space Agency will host a Google hangout at 1 p.m. EDT (1700 GMT) today to celebrate Rosetta and Comet 67P at perihelion. You can follow that event live here: https://plus.google.com/events/cl01p03as680jn4iflpp1hmdbr4