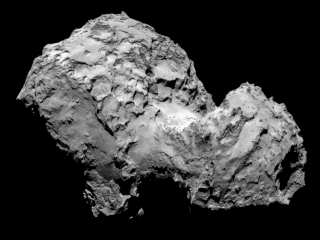 After a decade in space and 4 billion miles, Europe's Rosetta spacecraft has made history: For the first time ever, a robotic probe from Earth is flying with a comet and will soon enter orbit.

The European Space Agency's Rosetta spacecraft arrived at its target, Comet 67P/Churyumov-Gerasimenko, today (Aug. 6) to end a 10-year journey across the solar system. The spacecraft performed an engine burn that brought it about 62 miles (100 kilometers) from the comet's surface.

Comet 67P/C-G and Rosetta are now flying about 251 million miles (450 million kilometers) from Earth. Engineers on the ground had to program the probe to go through a series of complicated burns and maneuvers to make the spacecraft's rendezvous with the comet a possibility. [Photos: Europe's Rosetta Comet Mission in Pictures]

Applause broke out in Rosetta's mission control center in Darmstadt, Germany, where a crowd of ESA dignitaries and officials had gathered to watch the historic event.

Now, Rosetta controllers will scope out different spots on the comet, to find a good place to land the Philae lander, a small spacecraft that is expected to touch down on the surface of the comet this November. Philae will drop to the comet's surface and make measurements of the cosmic body's physical properties.

From Earth to a comet

The $1.7 billion (1.3 billion euros) Rosetta comet mission launched in March 2004 to begin its history-making journey to Comet 67P/C-G. The spacecraft was originally slated to launch a year earlier and visit a different target, the Comet 46P/Wirtanen, but the mission was delayed and its destination changed following an unrelated rocket failure. [Best Comet Encounters in History]

Comet 67P/Churyumov-Gerasimenko was discovered in 1969 by Ukrainian astronomers Klim Churyumov and Svetlana Gerasimenko. It circles the sun once every 6.5 years, and the comet's farthest point in orbit takes it beyond Jupiter.

The spacecraft is named after the Rosetta Stone, an ancient Egyptian tablet vital to the translation of hieroglyphics. The Philae lander is named after an obelisk discovered on an island in the Nile River. Rosetta mission scientists hope that the orbiter and lander unlock secrets of the history of comets, and the solar system, just as their namesakes helped scientists decipher Egyptian writing.

Rosetta made several loops of Earth and Mars to help the probe gain speed and move past Jupiter's orbit. After getting past the gas giant and making a close flyby of two asteroids — Steins and Lutetia — Rosetta was put into a deep slumber in 2011 for nearly three years. It awoke from hibernation mode in January 2014 to the delight of nervous ESA mission scientists.

Paolo Ferri, head of ESA's mission operations, said during a live webcast Wednesday that compared to January's awakening from hibernation, Rosetta's arrival at Comet 67P/C-G was much less tense. The reason? Spacecraft controllers have known for months that Rosetta and Philae are in good health, as opposed to January, when the probe had been sleeping for years.

The Rosetta spacecraft has captured remarkable views of the comet on its way into orbit. Images of the comet revealed that Comet 67P/C-G is actually two connected pieces hurtling through space together. The smaller "head" and larger "body" of the comet are connected by a bright "neck," as seen in photos of the comet taken by Rosetta.

"The only thing we know for sure at this point is that this neck region appear brighter compared to the head and body of the nucleus," Holger Sierks, of the Max Planck Institute for Solar System Research in Germany, said in a statement.

Rosetta has already collected enough data about the comet for scientists to know that the surface of Comet 67P is actually too warm to be ice-covered. Instead, ESA scientists think that the comet only has splotches of ice intermixed with a dusty crust.

Rosetta is expected to stay in orbit around Comet 67P/C-G until the end of 2015.

"We're going to going to ride along with this comet. We're going to have a ringside seat," Matt Taylor, ESA Rosetta project scientist, said Wednesday as the spacecraft arrived at Comet 67P/C-G. "It's going to be an awesome ride. Stay tuned."