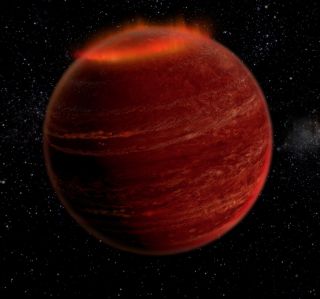 An artist's concept of brilliant auroras on the brown dwarf LSR J1835+3259, a misfit failed star about 18.5 light-years from Earth. The auroras are the first ever detected beyond our own solar system.
(Image: © Chuck Carter and Gregg Hallinan/Caltech)

An alien aurora 1 million times brighter than Earth's, robots building a moon telescope, a $5.5 billion asteroid and more in Space.com's top news stories of the week.

For the first time, astronomers have spotted an aurora outside of the solar system, coming from a Jupiter-sized brown dwarf star. More normally seen near Earth's poles, auroras are caused by electrically charged particles caught in a magnetic field. [Full Story: First Alien Auroras Found, Are 1 Million Times Brighter Than Any On Earth]

Astronomers spotted a rocky exoplanet just 21 light-years from Earth, closer than any other rocky alien world found. The newly-discovered world is around 4.5 times the size of Earth, and it shares its system with three other planets. [Full Story: Closest Rocky Alien Planet Discovered]

Once in a blue moon

A blue moon took the sky Friday, July 31, but there were no changes in the orb's color: the title refers to the second full moon in a month. Rarely, though, the moon can actually appear blue after volcanic eruptions or fires. [Full Story: Blue Moon of 2015 Thrills Skywatchers with Lunar Beauty (Photos)]

By releasing gas into space, the mysterious bright spots at the bottom of Ceres' Occator Crater seem to fill the crater with its own private atmosphere. [Full Story: Strange Bright Spots on Ceres Create Mini-Atmosphere on Dwarf Planet]

At 10 percent of NASA's previous cost estimate, a moon mission taking advantage of private spaceflight companies could come remarkably cheap. A new NASA-funded study gives the details and describes a $40 billion moon base, to boot. [Full Story: Moon Base Would Be Cheap with Help from Private Industry: Report]

The asteroid that whizzed past Earth Sunday, July 19, was no mundane collection of space pebbles: it was a solid body containing around $5.5 billion worth of platinum, as estimated by asteroid-mining company Planetary Resources. It will pass our way again in 2108. [Full Story: 'Trillion-Dollar Asteroid' Zooms by Earth as Scientists Watch]

NASA's Space Launch System, scheduled to fly in 2018, would usher astronauts to asteroids and Mars and could also cut down robotic exploration times. A probe riding that rocket could reach Europa in less than three years instead of the projected eight. [Full Story: NASA's Next Megarocket could Launch Mission to Europa]

Orbiting astronauts would control a rover's unfurling of a new radio telescope array on the far side of the moon. From that vantage point, the telescope will be able to explore the skies without humans' radio frequency interference. [Full Story: How Robots Could Build a Radio Telescope on Far Side of the Moon]

After a crash landing last year and recent reconnection with the comet-orbiting Rosetta, the Philae comet lander finally sent along its initial observations of its landing place. Researchers now know that Comet 67P is porous with a homogenous interior but a diverse surface covered in varying organic molecules. [Full Story: Surprising Comet Discoveries by Rosetta's Philae Lander Unveiled]