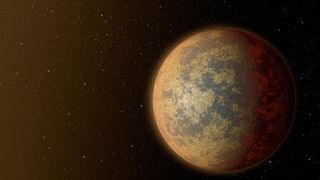 Astronomers have discovered a rocky exoplanet that lies just 21 light-years from Earth — closer than any other confirmed rocky alien world.

The alien planet, called HD 219134b, is about 4.5 times more massive than Earth, making it a so-called "super Earth," a new study reports. HD 219134b lies extremely close to its host star, completing one orbit every three days, so its surface is too hot to harbor life as we know it, researchers said.

And HD 219134b is not alone. Astronomers found three other planets in the system as well, one of which is at least 2.7 times as massive as Earth and orbits the star once every 6.8 days. Another is a Neptune-like world nine times more massive than Earth with a 47-day orbit; the third planet is 62 times more massive than Earth and takes 1,190 days to complete one lap around the host star. [10 Exoplanets That Could Host Alien Life]

That star is an orange "Type K" star slightly cooler and smaller than the sun. And it's visible to the naked eye under dark skies, in the "W"-shaped constellation Cassiopeia; it's a 5th-magnitude star near one of the legs of the "W," researchers said.

"Most of the known [alien] planets are hundreds of light-years away. This one is practically a next-door neighbor," study co-author Lars Buchhave, of the Harvard-Smithsonian Center for Astrophysics, said in a statement.

Radial velocity measurements allow researchers to determine a planet's mass. Additional observations by NASA's Spitzer Space Telescope confirmed that HD 219134b transits, or crosses the face of, its parent star from Earth's perspective. Measuring how much the host star dimmed during a transit enabled astronomers to calculate the planet's size.

With the size and mass known, researchers calculated that HD 219134b has a density of about 6 grams per cubic centimeter, making it a rocky world. (HD 219134b's sibling planets have not been observed to transit, so their density cannot be determined at the moment.)

The newfound planet is also the closest transiting alien world known — much closer than the many planets discovered by NASA's Kepler space telescope via the "transit method."

"Transiting exoplanets are worth their weight in gold because they can be extensively characterized," Spitzer project scientist Michael Werner, of NASA's Jet Propulsion Laboratory in Pasadena, California, said in the same statement. "This exoplanet will be one of the most studied for decades to come."

Indeed, discovery team members said that HD 219134b will make a great target for NASA's James Webb Space Telescope, which is scheduled to launch in 2018.

"Webb and future large, ground-based observatories are sure to point at it and examine it in detail," lead author Ati Motalebi, of the Geneva Observatory in Switzerland, said in the same statement.

While HD 219134b is the closest confirmed rocky and transiting exoplanet, it's not the nearest alien world of any type. That distinction goes to GJ674b, a planet of unknown composition that lies 14.8 light-years away, NASA officials said.

In 2012, a different team of astronomers announced that they had discovered a rocky planet in the Alpha Centauri star system, which lies just 4.3 light-years from Earth. However, this purported find remains a matter of considerable debate.

Astronomers have also found evidence of five planets, some of them possibly rocky, circling the star Tau Ceti, which is 11.9 light-years away. But these worlds have yet to be confirmed.

The new study has been accepted for publication in the journal Astronomy & Astrophysics.