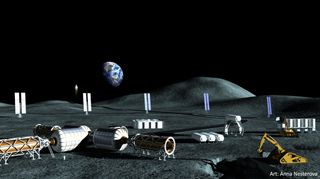 The dream of sending humans back to the moon could become a reality for the relatively low price of $10 billion — only about 10 percent of one previous cost estimate — as long as NASA is willing to buy from private spaceflight companies, a new report shows.

In 2005, NASA estimated that returning humans to the moon would cost $100 billion (approximately $122 billion in today's dollars). But if the success of private spaceflight companies like SpaceX and Orbital Sciences continues, NASA could send humans back to the lunar surface in as little as five to seven years, at a highly reduced cost, the new report shows.

That's not all: 10 to 12 years after that first commercial moon trip, NASA could develop a permanent base on the moon for about $40 billion in today's dollars, the report said. The proposed permanent moon base would be used to convert lunar ice into hydrogen propellant that could be sold for use by other spacecraft, including missions headed to Mars. [How to Build a Moon Colony (Photos)]

Launch costs included in the report were based on prices quoted for SpaceX's Falcon 9 and Falcon Heavy rockets. (Only the former is currently operational.) The command/service module for astronauts was based on the human-rated Dragon spacecraft that SpaceX is developing for International Space Station missions.

Private spaceflight companies, including Bigelow Aerospace, have already discussed the possibility of building a lunar base.

The report was issued by NexGen Space LLC, a space and public policy consultancy, and was funded in part by a grant from NASA's Emerging Space Office (part of the Office of the Chief Technologist). Charles Miller, president of NexGen Space LLC and principal investigator on the report, is a former NASA senior adviser for commercial space. The report was independently reviewed by a group that included former NASA executives and engineers.

The report drew praise from the Space Frontier Foundation and the National Space Society, which issued a joint statement after the report was released.

The report advocates an "evolvable lunar architecture" approach that would proceed in three stages.

The first phase would send robotic scouts to the poles while, back on Earth, private spaceflight companies would develop transportation systems to bring humans to the lunar surface. Next, humans would explore the poles themselves while a reusable lunar lander would be under development.

In the last phase, automated machines would mine the moon, with four humans monitoring operations from a permanent base — somewhat similar to the plot of the 2009 movie "Moon," which portrayed a helium-3 mining operation.

"This step-by-step approach allows for the incremental development and insertion of reusable elements in a low-risk, phased manner that minimizes cost and risk," the report stated, adding that robotics are lower-cost and can perform in higher-risk environments, but humans are more flexible and creative decision makers.

But the plan relies first and foremost on whether there is enough hydrogen in the lunar ice to make the mining operation worthwhile. If there is not a significant supply of hydrogen in the lunar ice, "the consequences would be significant," the report said. "If this happens, the proposed strategy for lunar development will need to be amended, and the plans for prospecting and mining will need to be delayed and potentially cancelled."

The report urges immediate robotic exploration of the poles, to see how much hydrogen exists there and how much could be mined.

Other risks that the report said must be addressed include developing and maintaining reliable robotic systems to mine the hydrogen, and creating long-lasting rocket engines that would allow a fully reusable lunar lander to move back and forth with supplies between the moon and low Earth orbit.

Managing a moon base

The report details how the lunar base would be a collaboration among multiple space agencies, and would be managed by an "International Lunar Authority" modeled after CERN (the European Organization for Nuclear Research), an international research facility outside Geneva that's home to the Large Hadron Collider, the world's most powerful particle accelerator.

Furthermore, the report cautions that NASA should learn from problems encountered at Antarctica's McMurdo Station, which offers limited opportunities for tourists, has confusing jurisdiction concerning criminal and property disputes, and favors science over purposes that could make money. The report specified that, although NASA's Emerging Space Office provided partial funding under a grant, the conclusions are solely those of the participating authors in the report, not NASA itself.