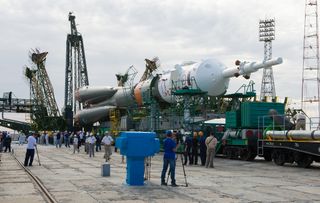 A Russian Soyuz rocket rolls out to the launch pad at Baikonur Cosmodrome in Kazakhstan on July 20, 2015, two days ahead of the planned launch of three new crewmembers to the International Space Station.
(Image: © NASA/Aubrey Gemignani)

Three new crewmembers will finally launch toward the International Space Station today (July 22) after a two-month delay, and you can watch the liftoff live.

Lindgren, Kononenko and Yui were originally supposed to head to the orbiting lab in late May, but their launch was pushed back by the investigation into the failure of Russia's robotic Progress 59 cargo mission.

Progress 59 fell back to Earth in early May without reaching the space station, apparently doomed by a problem with the third stage of its Soyuz rocket. The Soyuz booster also lofts manned Soyuz spacecraft, so the Russian space agency, NASA and their partners wanted to make sure all was well with the rocket before letting crews ride atop it again.

Kononenko is a spaceflight veteran, but today's launch will initiate the first trip to orbit for both Lindgren and Yui. If all goes according to plan, the trio will arrive at the space station about 6 hours after launch.

They will join NASA astronaut Scott Kelly and cosmonauts Gennady Padalka and Mikhail Kornienko, who have had the orbiting lab to themselves since three former crewmembers returned to Earth on June 11.

The departure of that trio — NASA astronaut Terry Virts, the European Space Agency's Samantha Cristoforetti and cosmonaut Anton Shkaplerov — was delayed by a month in the wake of the Progress 59 mishap, to minimize the amount of time the space station would be limited to three crewmembers.