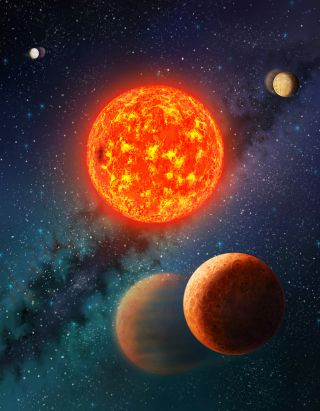 The exoplanet Kepler-138 b, shown here in an artist's view, is the first alien planet smaller than the Earth with both its mass and size measured. The planet, found with NASA's Kepler space telescope, orbits a red dwarf star 200 light-years from Earth.
(Image: © Danielle Futselaar, SETI Institute)

A Mars-size planet about 200 light-years from our solar system has turned out to be the lightest known alien world orbiting a normal star, researchers say.

Astronomers made the discovery after measuring the size and mass of the baking-hot planet, named Kepler-138 b, which orbits a red dwarf star called Kepler-138. Mars is only 53 percent the size of the Earth (or just about half the size), so Kepler-138 b is smaller than the Earth.

In the past couple of decades, astronomers have confirmed the existence ofmore than 1,800 exoplanets, or planets orbiting a star other than our sun. However, it's more difficult for scientists to calculate the masses of small, rocky planets like Mars or Mercury than for large, gaseous worlds such as Jupiter or Saturn. Scientists measure the masses of exoplanets by looking at how strongly their gravitational fields tug on their stars; small planets have small masses, and their weak tugs on their stars are more difficult for astronomers to detect. As such, few Earth-size exoplanets have had their masses measured. [The Smallest Known Alien Planets in Pictures]

In this new study, astronomers investigated Kepler-138, a cold, dim red dwarf star with a mass about half that of the sun. Kepler-138 is located about 200 light-years from Earth, in the constellation Lyra.

Kepler-138 "is more than 10 million times further away from us than our sun," study lead author Daniel Jontof-Hutter, an astronomer at Pennsylvania State University in University Park, told Space.com.

The star Kepler-138 is home to three exoplanets, prior research has confirmed by detecting the slight dimming of the star's light that occurs whenever one of these worlds crosses in front of it. Each of these two planets — Kepler-138 c and Kepler-138 d — is about 1.2 times as wide as Earth. The third, Kepler-138 b, is a little more than half as wide as Earth, making it about the size of Mars.

"Kepler-138 b has the same apparent size to us as a golf ball 10 million kilometers [6.2 million miles] away," Jontof-Hutter said.

These three exoplanets orbit very close to their star. Kepler-138 b takes a little more than 10 days to complete its orbit, Kepler-138 c requires nearly 14 days and Kepler-138 d needs about 23 days.

Using NASA's Kepler spacecraft, the researchers looked at how the gravitational tug-of-war among these exoplanets influenced the lengths of their orbits. Because the strength of a planet's gravitational pull is directly related to its mass, the scientists were able to weigh all three of these planets.

The astronomers found that the mass of the Mars-size inner planet, Kepler-138 b, is about one-fifteenth, or 6.7 percent, of Earth's, making it about two-thirds the mass of Mars.

"Kepler-138 b is the first exoplanet smaller than Earth to have both its size and its mass measured," Jontof-Hutter said.

The least massive known alien world may be the exoplanet PSR B1257+12 b, which has an estimated mass only about one-fiftieth, or 2 percent, that of Earth. However, that world does not orbit a normal star, but instead circles a pulsar — a dense, rapidly spinning remnant of a supernova explosion.

Knowing the mass and width of Kepler-138 b helped the researchers calculate its density, which they found is about two-thirds that of Mars, suggesting it has a purely rocky composition.

Although Kepler-138 b may be similar in mass and width to Mars, it is so much closer to its star, and thus hotter, meaning it is likely very different from Mars, Jontof-Hutter said. "In fact, all three planets orbiting Kepler-138 are likely too hot to retain liquid water," Jontof-Hutter said. On the outermost planet, surface temperatures are about 250 degrees Fahrenheit (120 degrees Celsius), while those on the innermost planet are about 610 degrees F (320 degrees C).

This finding opens up the study of rocky alien planets smaller than Earth, Jontof-Hutter said.

"The enormous variety of exoplanets that have been discovered by Kepler show us that systems like our own solar system are probably not the norm, and we don't know why," Jontof-Hutter said. Analyzing more exoplanets "will give us clues about how planets form and enable us to learn how common systems like are own really are."

The scientists detailed their findings in the June 18 issue of the journal Nature.

[Editor’s note: This story has been updated to correct the temperatures of the planets Kepler-186 c and d in the Kepler-186 star system.]