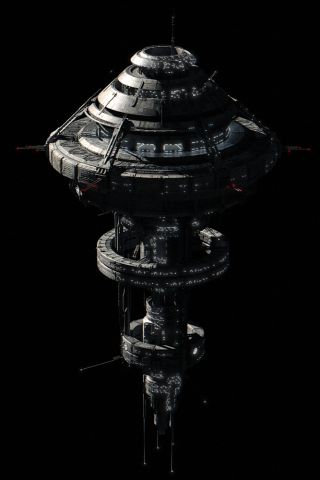 The "Space Station," featured in SyFy's new show "Dark Matter," is about spaceship crewmembers who wake up with no recollection of who they are or where they came from.
(Image: © SyFy)

Spaceships, alien planets, deadly assassins, computers with personalities, and the backdrop of space: the staples of science-fiction drama will be plentiful on the SyFy channel this summer, as the network debuts two original, space-centric shows.

In the SyFy original series "Dark Matter," spaceship crewmembers awaken to find no memories of who they are. In "Killjoys," two interplanetary bounty hunters — one with a dark past — risk becoming outlaws themselves. Both of the new shows will air on SyFy on Friday nights starting in June.

"Dark Matter" follows the crewmembers of a derelict spaceship as they try to uncover their pasts while dodging threats at every turn. The show was created by Joseph Mallozzi and Paul Mullie, who also wrote the graphic novel that the show is based on. Mallozzi and Mullie were also executive producers and writers of the "Stargate" TV franchise. [10 Space Movies to Watch in 2015]

"Killjoys" follows two bounty hunters, Dutch and John, along with their talking spaceship Lucy, through "the Quad," a planetary system with three moons. The pair is soon joined by D'Avin, John's outlaw brother who cut himself off from family for as-yet unexplained reasons. The team effort to spare D'Avin from death also begins to reveal Dutch's dark past, which is coming back to haunt her.

Later this year, SyFy will debut a truly epic-looking space opera called "The Expanse," based on the best-selling book series. The show takes place 200 years in the future and appears to feature a colony of humans living under a dome on an inhospitable planet. The plot of the show "follows the case of a missing young woman who brings a hardened detective and a rogue ship's captain together in a race across the solar system to expose the greatest conspiracy in human history," according to the SyFy website. Screenwriter Mark Fergus and Hawk Ostby ("Children of Men," "Iron Man") penned the pilot and will continue to serve as writers and executive producers for the show.

It's going to be a very cosmic year for SyFy.