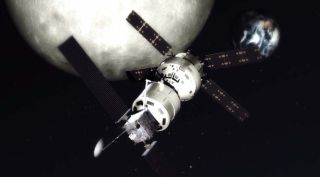 WASHINGTON — While NASA does not yet have specific plans for human missions beyond 2021, the agency is in the early stages of developing a sequence of missions in cislunar space in the 2020s to prepare for later missions to Mars.

Those plans, which could involve both international and commercial partners, would test out habitation modules and other technologies on missions around the moon ranging from several weeks to a year.

"The concepts that we're working on today call for us to begin in the early '20s with a set of missions involving Orion to get some early experience in cislunar space, leading to a series of longer missions," said Skip Hatfield, manager of the Development Projects Office at NASA's Johnson Space Center, during a session of the Humans to Mars Summit here May 6. [Photos: Deep-Space Habitats of the Future]

Although NASA has notional plans for a series of Orion missions launched by the Space Launch System in the 2020s, the last firm mission on the agency's books is Exploration Mission (EM) 2, the first crewed SLS/Orion flight, scheduled for 2021. One of those future missions would likely send astronauts to an asteroid placed in lunar orbit as part of the Asteroid Redirect Mission, but the date of that mission depends on when — or if — that asteroid arrives in cislunar space.

NASA has instead discussed human missions to cislunar space as part of the "Proving Ground" phase of its overall human Mars exploration strategy, called "Journey to Mars." That phase, between the current "Earth Reliant" and long-term "Earth Independent" phases, is intended to test out technologies and gain experience before sending humans to Mars.

A key purpose of those missions, Hatfield said, would be to test habitat modules and related systems that could be used for Mars expeditions. "The next big thing we need to do if we're going to go long distances is the habitation system," he said. "There are a lot of things that go into this next step."

Studies have looked at two different approaches for developing these habitation modules. One concept involves developing a series of smaller modules that could be launched with Orion spacecraft using the upgraded Block 1B version of the SLS. Those launches, starting as soon as EM-3, the second crewed SLS/Orion mission, could accommodate modules weighing up to 10 to 12 metric tons, said Matthew Duggan, space systems manager at Boeing.

The advantage of this approach, he said, is it allows habitat modules to be launched for "free" — that is, without the need of a dedicated launch. "With every Orion mission, you're adding something useful and you're aggregating this larger and larger vehicle in cislunar space," he said.

The disadvantage, said David Smitherman, technical manager of the Advanced Concepts Office at NASA's Marshall Space Flight Center, is that it is less efficient. He proposed using one or two large modules flown on dedicated SLS launches, which he argued can save mass and provide more volume than a collection of small modules.

"The mass actually comes down a little bit as you go from a three-module set to a two-module set to a single module, even though you're increasing volume all along the way," he said, citing research to be published later this year.

NASA is augmenting its internal planning with a series of study contracts awarded earlier this year under a program called Next Space Technologies for Exploration Partnerships, or NextSTEP. Seven of the twelve NextSTEP studies cover either habitation modules or their key subsystems.

Lockheed Martin Space Systems is using its NextSTEP award to study habitat technologies leveraging the company's proposed Jupiter system for transporting cargo   to the International Space Station, as well as the capabilities offered by Orion.

"Orion is a highly capable spacecraft designed to keep crews alive in this environment for a long period of time," said Lockheed Martin space architect Josh Hopkins. "That means you can keep the outpost for the first several flights to be relatively small and inexpensive."

What happens once the NextSTEP studies are completed next year is not yet clear, Hatfield said, and will depend in part on the results of the studies. "That's something we have to work out," he said, adding that part of his current work includes drafting an acquisition strategy that could incorporate international or public-private partnerships for some elements.

Although the technical and programmatic structure of those cislunar missions remains to be developed, there is widespread agreement that such missions are needed before human missions to Mars. "We cannot take that giant leap to a thousand-day Mars mission straight from the ISS," Hopkins said. "We need something that is on the edge of deep space."