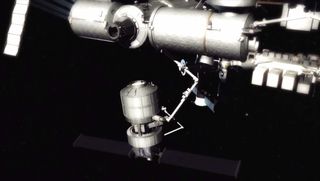 Lockheed Martin has unveiled a new spaceflight architecture that it says could take cargo to the International Space Station and help facilitate humanity's spread out into the solar system.

Lockheed hopes the system — which features a space tug known as Jupiter and a supply module called Exoliner — wins a NASA contract for the next round of cargo missions to the space station, which would commence in 2018. But the company's ambitions extend far beyond low-Earth orbit, to destinations such as the moon and Mars. Lockheed unveiled the project, along with a video animation of how Jupiter and Exoliner would work, on Thursday (March 12).

"Although our priority is going to be servicing the International Space Station and providing the ability to carry commercial payloads and deploy small satellites, we're also designing this system from the beginning to be able to do deep-space missions," Lockheed Martin space exploration architect Josh Hopkins told reporters during a news briefing Thursday. [See more views of Lockheed's Jupiter and Exoliner spacecraft]

"That means that NASA will be able to start doing some early human spaceflights beyond low-Earth orbit without a huge investment," Hopkins added. "Instead, what they'll be able to do is buy more copies of the same design."

Lockheed named the refuelable Jupiter spacecraft after one of the two locomotives that met at Promontory Summit, Utah, in 1869 to mark the completion of the First Transcontinental Railroad.

The "public-private partnership that basically established the Transcontintal Railroad changed everything," said Jim Crocker, vice president and general manager of Lockheed's Space Systems International division. "It changed the economics of how the United States competed in the world, and we believe that the system that we're unveiling tonight will do the same."

Orbital ATK and SpaceX will face some competition in this next round: Boeing, Sierra Nevada and Lockheed have all thrown their hats into the CRS-2 ring. NASA is expected to make its decision this June. (The agency hasn't said how many contracts it will award, but it's likely to be at least two, given the agency's previously stated desire for redundancy and competition.)

If Lockheed Martin's entry is selected, the company's first operational mission — likely in 2018 — would launch Jupiter and an Exoliner toward the orbiting lab aboard a United Launch Alliance Atlas V rocket.

The vessel is designed to be disposable, like the cargo ship it derives from, the European Space Agency's Automated Transfer Vehicle. (The new vehicle will be built by European company Thales Alenia Space.) So after unloading the Exoliner, astronauts on the station would fill the vessel with trash and send it to burn up in Earth's atmosphere.

Here's where things would get interesting. The old Exoliner's departure would be coordinated with the launch of a new one from the ground. Jupiter would haul the doomed Exoliner over to the new one — which would still be attached to the Atlas V's Centaur upper stage — and then swap the two cargo vessels out using its onboard robotic arm, Crocker said. [Space Station's Robotic Cargo Fleet: A Photo Guide]

The Centaur would then de-orbit, taking the used Exoliner to a fiery death, and Jupiter would haul the new cargo vessel to the space station. This cycle would repeat on future resupply missions, which would launch just the "brainless" supply modules.

"The expensive part of this system stays in orbit and is reused on every mission," Crocker said, referring to Jupiter.

Fly me to the moon

Lockheed hopes International Space Station  resupply missions are just the beginning for Jupiter and the Exoliner.

Jupiter is based on NASA's Lockheed-built Mars Atmosphere and Volatile Evolution spacecraft, or MAVEN, which arrived in orbit around the Red Planet in September 2014. Jupiter is therefore designed for deep-space travel, Hopkins said. And the Exoliner could be modified easily to become a human habitat rather than a cargo vessel, he added.

Indeed, Hopkins said the system could be used to establish a human outpost near the moon, which would help our species learn how to live in deep space and prepare for more ambitious treks to an asteroid or Mars.

The Jupiter/Exoliner system could be used in concert with NASA's Orion capsule, which the agency is developing to help get astronauts to deep-space destinations. Attaching Exoliner to Orion would triple astronauts' living space, Hopkins said.

"We want the ability to offer commercial logistics services to NASA and the international partners, not just to ISS but to lunar orbit and beyond. So this gives us the capability to exercise that business model," Hopkins said. "With our CRS-2 offer, we're not just developing the technology to provide this first cis-lunar [Earth-moon space] outpost, we're also demonstrating the economic model to make that work in an affordable way."