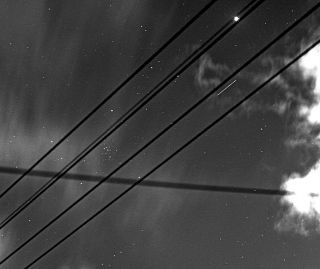 The pictures of OTV-4 are two-second–long exposures through overhead power and telephone lines. The star cluster shown is Messier 44, and the brightest star is Regulus.
(Image: © Greg Roberts)

A global team of vigilant satellite watchers has caught the U.S. Air Force's robotic X-37B space plane on camera as the craft circles Earth on its fourth mysterious mission.

The unmanned X-37B launched May 20 atop a United Launch Alliance Atlas V rocket from Florida's Cape Canaveral Air Force Station. Details about the current mission — known as Orbital Test Vehicle-4, or OTV-4 — are classified, but the satellite trackers' new observations are shedding some light on the spacecraft's activities.

"It's in a lower orbit than normal … had us confused for a while, as I thought it would be the standard operating orbit," tracker Greg Roberts, who lives in South Africa, told Space.com. "The inclination is also lower than before." [X-37B Space Plane's 4th Mystery Mission in Photos]

Roberts captured pictures of the space plane in two-second–long exposures through what he called "cursed power and telephone lines."

The X-37B is built by Boeing Network & Space Systems, a unit that also designs and delivers satellites used for communications, navigation, intelligence and weather monitoring. The robotic vehicle looks like a miniature version of NASA's now-retired space shuttle.

All of these X-37B missions have intrigued amateur astronomers such as Roberts and Toronto-based Ted Molczan, who are keen to see exactly where the space plane is flying.

Molczan leads a network of citizen satellite observers. He and Roberts organized a team of widely dispersed amateur astronomers, an effort that enabled the detection of the X-37B at the very opening of a visibility window, shortly after OTV-4 launched.

"Tracking down a launch quickly depends as much on organization as it does on orbital analysis. A lone observer can be clouded out for days," Molczan told Space.com. "This almost certainly advanced the discovery by at least several days."

The rapid discovery of OTV-4 in orbit has already led to some interesting realizations.

"One thing that OTV-4 has in common with each of its predecessors is that its ground track nearly repeats after every 31 revolutions, which takes two days," Molczan said. "This could be in support of a surveillance mission, to permit targets to be revisited frequently, or it may serve some other more mundane operational purpose that we have not discovered."

On previous OTV missions, the duration between repeating ground tracks ranged from two to six days, Molczan said, "so we will not be surprised to see OTV-4 behave similarly."

Such adjustments are readily accomplished by maneuvering the vehicle to make small changes in the orbital period, Molczan added.

The Air Force has not said how long OTV-4 will remain aloft. When the craft does come down, it may land at a site the X-37B program has not yet used: NASA's Kennedy Space Center, in Florida. The three previous missions touched down at California's Vandenberg Air Force Base.

Leonard David has been reporting on the space industry for more than five decades. He is former director of research for the National Commission on Space and is co-author of Buzz Aldrin's 2013 book "Mission to Mars: My Vision for Space Exploration" published by National Geographic with a new updated paperback version released this month.Follow us @Spacedotcom, Facebook or Google+. Originally published on Space.com.