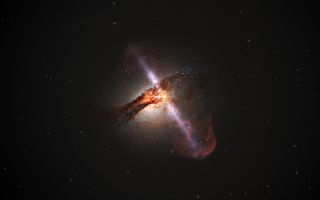 Powerful jets of material spewing from the edge of monster black holes may be more likely to arise where two galaxies have merged together, a new study suggests.

Like a cosmic version of Old Faithful (the famous Yellowstone geyser), some black holes at the center of galaxies will spew jets of material into space that stretch for thousands of light-years. You can see an illustration of what these gushing pillars look like in a video of the galaxy crash discovery.

Using data from the Hubble Space Telescope, new research suggests these jets are more likely to be found in galaxies that are the product of galaxy mergers. However, the authors of the  research say merging two galaxies isn't always a recipe for creating galactic jets. [When Galaxies Collide: Photos of Great Galactic Crashes]

In the study, scientists used the Hubble Space Telescope to look for the radio waves emitted by the massive jets that spew particles into space at nearly the speed of light. These jets are thought to be created by activity taking place near the edge of a supermassive black hole (and astronomers think most, if not all, galaxies in the universe have a supermassive black hole at their center).

When a black hole is gobbling up material, the friction and movement of the particles may generate light. If the black hole is particularly gluttonous, surrounded by a buffet of matter, it may create enough light to outshine all the stars in the galaxy. These bright regions around a galactic center are called active galactic nuclei, or AGNs.

The researchers compared AGNs that produce jets and those that don't, as well as non-AGN galaxies with no jets. From there, they looked into the history of these galaxies, looking for evidence that the current galaxy was the product of a merger.

What they found was that more than 90 percent of the surveyed AGNs with jets were also the product of galaxy mergers. But, not all galaxy mergers necessarily created jets.

"We found that most merger events in themselves do not actually result in the creation of AGNs with powerful radio emission," said Roberto Gilli, of the Osservatorio Astronomico di Bologna, Italy, and an author on the paper. "About 40 percent of the other galaxies we looked at had also experienced a merger and yet had failed to produce the spectacular radio emissions and jets of their counterparts."

In a statement, the European Space Agency said: "Although it is now clear that a galactic merger is almost certainly necessary for a galaxy to host a supermassive black hole with relativistic jets, the team deduced that there must be additional conditions which need to be met."

It's possible that the merger of two galaxies shovels more gas toward the black hole at the new galaxy's center, which could increase the amount of food for the black hole to feast on, thus increasing the likelihood of jets forming.

The statement from ESA said that more galaxies would need to be observed to continue to shed light on why this connection between jets and galaxy mergers might arise.