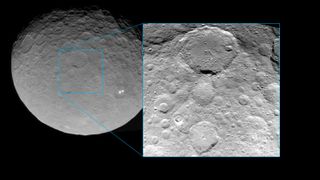 A new view of Ceres, captured by NASA’s Dawn probe on May 23, 2015, shows fine details of the dwarf planet’s surface coming into focus.
(Image: © NASA/JPL-Caltech/UCLA/MPS/DLR/IDA)

A new photo from NASA's Dawn spacecraft shows the battered surface of the dwarf planet Ceres in unprecedented detail.

"The view shows numerous secondary craters, formed by the re-impact of debris strewn from larger impact sites. Smaller surface details like this are becoming visible with increasing clarity as Dawn spirals lower in its campaign to map Ceres," NASA officials wrote in an image description today (May 28).

"The region shown here is located between 13 degrees and 51 degrees north latitude and 182 degrees and 228 degrees east longitude," they added. "The image has been projected onto a globe of Ceres, which accounts for the small notch of black at upper right."

The $473 million Dawn mission launched in September 2007 to study Vesta and Ceres, the two largest objects in the main asteroid belt between Mars and Jupiter. Vesta and Ceres are planetary building blocks left over from the solar system's early days, so Dawn's observations should help researchers better understand how rocky worlds like Earth and Mars formed and grew, NASA officials have said.

Dawn orbited the 330-mile-wide (530 km) Vesta from July 2011 through September 2012 and reached Ceres, which is 590 miles (950 km) across, this March. In the process, Dawn became the first spacecraft to orbit two objects beyond the Earth-moon system, as well as the first to circle a dwarf planet.

Dawn is studying Ceres from a series of progressively closer-in orbits. The craft's first science orbit lay about 8,400 miles (13,500 km) from the dwarf planet's surface; Dawn is currently spiraling down to a 2,700-mile-high (4,400 km) orbit, which it should reach on June 3.

By the time Dawn wraps up its mission in June 2016, it will be eyeing Ceres' intriguing surface from just 230 miles (375 km) away.