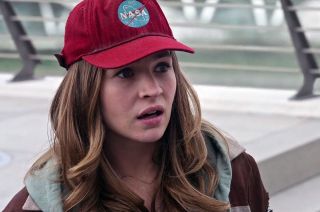 In the new Disney film "Tomorrowland," now in theaters, NASA provides the launch pad — literally and figuratively — for the movie's plot to unfold.

The feature film, which drew its initial inspiration from the theme park land by the same name, juxtaposes the end of NASA's space shuttle program in 2011 with the space age future Walt Disney envisioned when he opened the original Tomorrowland in 1955.

"Tomorrow can be a wonderful age. Our scientists today are opening the doors of the Space Age to achievements that will benefit our children and generations to come," the animator and entertainment mogul said 60 years ago. "The Tomorrowland attractions have been designed to give you an opportunity to participate in adventures that are a living blueprint of our future." [Disney's "Tomorrowland" in Pictures]

But that is not the future that Casey Newton (actress Britt Robertson) faces as "Tomorrowland" begins. (Note: minor spoilers ahead.) The daughter of a NASA engineer, Casey dreams of flying in space and treasures her father's NASA logo-adorned cap. Her reality though, is the dismantling of Launch Pad 39A, the real-life platform at NASA's Kennedy Space Center in Florida from where astronauts left for the moon and shuttles flew for three decades.

"The beginning starts off with sort of an empty dismantling of the pad, which one can interpret in different ways," said Bert Ulrich, NASA's liaison for the film, in an interview with collectSPACE.com. "But then, what ends up happening, there's this hat, and it grounds the Casey character in where she comes from, why she is what she is."

You wanted to see Tomorrowland

Casey attempts to fix her future —starting with the launch pad's fate —and from there finds herself on an unexpected journey with inventor Frank Walker (actor George Clooney) to the fantastical Tomorrowland that Disney first imagined and that director Brad Bird built his movie upon.

Most of the movie's retro-future is the product of computer animation and Hollywood sets. But the pad was and is real and provided the filmmakers with the same sense of awe they were trying to capture on screen.

"To many of us [who worked] on the film, NASA and the mission of NASA is close to our hearts and so being there and able to film some of the film there was a treat," Bird said in a statement provided by Disney.

That the launch pad even existed for Bird, Robertson and the crew to film on in 2013 reveals the fact behind movie's fiction. Unlike its twin, 39B, or its "Tomorrowland" version, Pad 39A's support towers are still standing today, though are being converted for commercial use by the spaceflight company SpaceX under a 20-year lease with NASA.

And although the launch pad has been dormant since the final space shuttle, Atlantis, lifted off in July 2011, it did provide a platform for the "Tomorrowland" crew to witness part of NASA's real future, as a robotic spacecraft left the Earth for Mars from another pad located just a couple of miles away.

"Just to stand there was amazing," said John Walker, the movie's executive producer. "We got to watch the MAVEN probe launch live – and from closer than the press did. It was fantastic."

"It was worth making the whole movie just to be able to do that," Walker added.

"We got to watch a launch from the launch pad, which was one of the coolest moments on the film," he said.

The movie's fictional backstory, which Disney released as part of an exhibition and alternate reality game that began two years ago, explains that "Tomorrowland" was inspired in part by the real collaboration between Walt Disney and NASA's Wernher von Braun.

The entrepreneur and rocket scientist worked together on a trio of Tomorrowland television specials that introduced the public to the promise of space exploration.

"You had that 60's collaboration with Disney and Wernher von Braun, who represented NASA at the time, and then you have the co-mingling of NASA and Brad Bird's vision of 'Tomorrowland' today," Urlich remarked, noting the life-imitating-art-imitating-life nature of the movie.

Ulrich called it a coincidence, but for Robertson it seemed a natural fit.

Click through to collectSPACE.com to watch the cast of "Tomorrowland" describe Walt Disney’s vision for Tomorrowland.