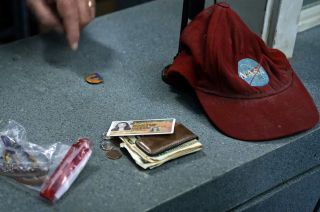 A still from the teaser trailer for "Tomorrowland" shows a special pin and a hat with NASA's logo.
(Image: © collectSPACE.com)

The "Tomorrowland" teaser trailer features the character Casey Newton (played by Britt Robertson) leaving a police department and taking a red hat bearing the NASA logo with her. While the movie's plot is still under-wraps, the teaser was revealed Thursday (Oct. 9) to a raucous crowd here at New York Comic Con. Robertson, George Clooney and Hugh Laurie were even on-hand to reveal some never-before-seen footage from "Tomorrowland" and discuss the film under the watchful eye of producer Damon Lindelof and director Brad Bird.

"[Tomorrowland is] larger than most things I've ever been around," Clooney said after making a surprise appearance at the Comic Con panel. "The beautiful thing about it is that Brad has a real vision of the film he wants to make, and it was really fun, I think for all of us, to come play in this giant toy box with him."

After much cajoling from Clooney, Bird and Lindelof showed another clip from the film during the Comic Con panel much to the delight of the packed crowd. The exclusive features Clooney fighting off some intruding robots with Casey.

"Tomorrowland's" first teaser shows Casey on her way out of jail when she finds an odd pin in her items. When she picks up the pin, it transports her into a field of wheat. Once she lets go of the pin, however, she ends up right back in the prison waiting room.

Casey's NASA hat isn't the movie's only tie to outer space. A box allegedly found in the Disney vaults actually inspired much of the plot for the movie. The container held, among other things, a note printed on NASA letterhead that asked Walt Disney to meet the rocket scientist Wernher von Braun and tour Marshall Space Flight Center in Alabama. Disney really did tour the flight center in April 1965.