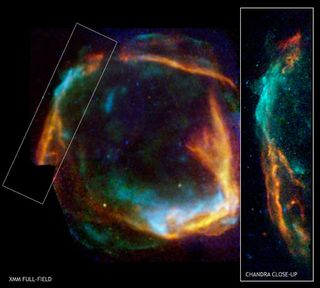 Nearly2,000 years ago, Chinese astronomers spotted a bright light materializing inthe night sky. Turns out the skywatchers had witnessed the spectacularexplosion of a dying star.

That wasthe year 185 AD. Today astronomers said they might have identified the remainsfrom this ancient stellarexplosion, now considered the oldest supernovaon record.

"I think itis very interesting that we can now say with some confidence, but not absolutecertainty, that RCW 86 is the remnant of AD 185," said Jacco Vink of theUniversity of Utrecht, the Netherlands.

In theAstrological Annals of the Houhanshu, Chinese astronomers noted the brightlight in the sky twinkled like a star but didn't appear to move, arguingagainst the object being a comet. Within eight months, they recorded, thebright light faded, a phenomenon that astronomers now know is consistent withsupernovas.

When a starthat's more than eight times the mass of our sunburns out, gravity's inward tug tears apart the star's innards. It collapsesand then rebounds. Called a supernova,the explosion propels jets of high-energy light and matter out into space. Thehurling remains and the material they encounter are heated to millions ofdegrees and can emit intense X-ray radiation for thousands of years.

Astronomershad suggested the stellar material called RCW 86 could be leftovers from the185 AD supernova, based on historical records of the object's position in thesky. But previous work estimated the object was 10,000 years old, which led todoubts about the link.

Astronomersled by Vink studied the material in RCW 86 to determine when its progenitorstar originally exploded within the Southern Hemisphere constellation Centaurus.To do this, they used the X-ray capabilities of NASA's Chandra X-ray Observatoryand the European Space Agency's XMM-Newton Observatory.

"Our newcalculations tell us the remnant is about 2,000 years old," said Aya Bamba, acoauthor from the Institute of Physical and Chemical Researcher in Japan.

The new ageestimate matches the supernova spotted in 185 AD. But this calculation meansthe remnantis 8,000 years younger than previously thought. The astronomers said thedifference can be attributed to the irregular shape of the remnant's expandingbubble. Stellar wind from the progenitor star pushed some of the remnant'sgases in a certain direction, forming a dense pile. "The idea for RCW 86 isthat in some regions the shock has hit this piled-up material. In those regionsthe shock will start moving slower," Vink said. And in other regions, the shockwave is much speedier.

With moreinformation on RCW 86, Vink said he could now probe the original supernova tolearn what type of star exploded and how much energy was involved in the stellarfireworks.

Theresearch is detailed in the Sept. 1 issue of The Astrophysical JournalLetters.