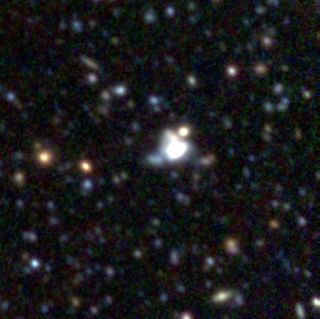 This image of SNLS-03D3bb shows that young stars are blue, as is their host galaxy.
(Image: © Andy Howell, University of Toronto)

A new discovery is casting doubt on the idea that a type of star explosion shines with equal brightness wherever it occurs in the universe. The finding could have implications for estimates of the size of the cosmos.

Type-1a supernovae are typically used as standard indicators of distance in the vast expanse of the universe. But the discovery of a Type-1a supernova more massive than was thought possible could force astronomers to rethink their ideas about the luminous objects, scientists reported today.

A star that has exhausted its nuclear fuel, a white-dwarf, starts to accumulate matter from a companion star until it reaches its maximum mass. When the white dwarf's mass reaches 1.4 times the mass of the Sun, known as the Chandrasekhar mass limit, it becomes unstable and blows apart in a titanic explosion, becoming a Type-1a supernova.

It was thought that all Type-1a supernovae emit equal amounts of light at their peak and fade at the same rate afterwards. Because of this they are used as "standard candles" for figuring out cosmic distances. In 1998, using these Type-1a supernovae, astronomers found that the expansion of the universe is accelerating.

But astronomers recently discovered a Type-1a supernova called SNLS-03D3bb that shines more than twice is bright as its counterparts, researchers report in the Sept. 20 issue of the journal Nature. This along with the low kinetic energy of the star, the energy of the flying objects from the explosion, implies that the supernova originated from a white dwarf more massive than the Chandrasekhar limit.

"The ejecta was moving very slowly in this supernova, and we think it is because the star that exploded was unusually massive, so it had a higher binding energy," said lead study author Andy Howell, a University of Toronto postdoctoral researcher. " Basically if you have a certain amount of energy produced from fusion in an explosion, then part of that energy has to go into overcoming the binding energy of the star, and the rest goes into kinetic energy."

SNLS-03D3bb comes from a pack of young stars in a distant galaxy when the universe was much younger than it is today. The color of young stars and their host galaxies are generally blue. This, in addition to other methods, is how scientists determined the age of the star.

"We fit galaxy models to the data and they indicate a young population," Howell told SPACE.com. "The galaxy also has emission lines that indicate that they are still forming stars." Another line of evidence from another study showed that the supernovae that take the longest to rise to peak brightness and decline only come from a young population.  "This supernova has an exceptionally broad light curve."

The new discovery could help astronomers weed out unusual Type-1a supernovas and improve their estimates of cosmic distances.

"We are fortunate in that this one had several indications of being odd," Howell said. "It clearly didn't follow the relationship that we use to calibrate supernovae for cosmology, but also it had an unusual spectrum, with an odd balance of elements moving at slow speeds.  So by looking at the spectrum we can screen wierdos like this out."

Researchers do however worry that some extreme cases lurking in the data could go unspotted.