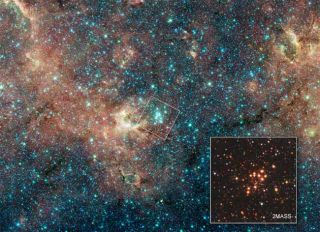 An infrared image of the region in the Scutum constellation where the massive star cluster containing the red supergiants (inset) was discovered.
(Image: © Don Figer et al./NASA/JPL-Caltech)

Astronomers have traced the source of mysterious high-energy X-rays and gamma rays in space to a little known star cluster in the Milky Way.

The cluster sits about 19,000 light-years away from Earth in the constellation Scutum. It contains about 20,000 stars, most of which are hot, young blue stars.

Astronomers had known about the star cluster before, but it was only recently that they confirmed the number of stars it held.

In the late 1990's, several observatories detected very high-energy X-rays and gamma rays coming from the region but astronomers were uncertain about their source. It was thought the blasts might have originated from distant galaxies or from pulsating stars known as pulsars, which typically emit radio waves but can send out other wavelengths of energy as well.

A team of researchers is now proposing that the blasts are the result of massive stars known as red supergiants in the cluster that exploded cataclysmically as supernovae.

Supporting their hypothesis is the presence of 14 red supergiants within the cluster. Red supergiants are massive stars at the ends of their lives that can bloat up to about 100 times their normal size before exploding.

Because the red supergiant phase for stars lasts only about half a million to a million years--very short in astronomical terms--only a few red supergiants have ever been seen. Supernovae are even more difficult to detect, because even though they are billions of times brighter than normal stars when they explode, they remain visible only for several weeks or months.

"This observation is a rare chance to study huge stars just before they explode," said Don Figer, an astronomer at the Space Telescope Science Institute in Baltimore who led the study. "Normally, we don't get to see stars before they pop off."

Only about 200 red supergiants have been spotted in the Milky Way and these are typically scattered far apart, so finding more than a dozen clustered together is highly unusual. Previous to this discovery, the record-holder for the star cluster containing the most red supergiants was NGC 7419, which had five.

Stars that become red supergiants are typically between 6 million to 15 million years old and about 8 to 25 times more massive than our Sun.

"If a red supergiant were situated where our Sun is, it would envelop Jupiter," Figer said.

Because the red supergiants in this cluster are still relatively bright, Figer's team estimates that the star cluster is relatively young, between 8 and 10 million years old. The idea is that stars in the cluster have to be young enough for astronomers to see them before they go supernova, yet old enough for some of them to have evolved to the red supergiant phase in the first place.

The reason the cluster has been largely overlooked until now is because of the interstellar dust that blankets much of the Milky Way.

"This cluster isn't too far away but there's a certain amount of dust between us and it," Figer said. "At optical wavelengths, the stars are so faint that no telescope can see them."

But using NASA's infrared Spitzer Space Telescope, the researchers were able to pierce through the dust cover and see the cluster in detail for the first time.

The cluster is the first in a survey of 130 potential massive star clusters in our galaxy that the team has targeted for study over the next five years.

The findings were presented last week at the 207th meeting of the American Astronomical Society in Washington, DC.