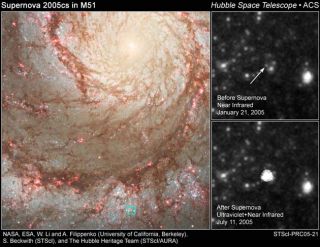 Amidst the glitter of billions of stars in the majestic spiral galaxy called the Whirlpool (M51), a massive star abruptly ends its life in a brilliant flash of light. NASA's Hubble Space Telescope snapped images of the exploding star, called supernova (SN) 2005cs, 12 days after its discovery. Astronomers then compared those photos with Hubble images of the same region before the supernova blast to pinpoint the progenitor star (the star that exploded).
(Image: © NASA, ESA, W. Li and A. Filippenko (University of California, Berkeley), S. Beckwith (STScI), and The Hubble Heritage Team (STScI/AURA))

A star explodes every second or so, somewhere in the universe. It's how they die, and astronomers call the events supernovas.

While much has been learned over the past few decades, supernovas remain somewhat elusive. Among the trickiest aspects of studying them is to spot a star exploding and figure out what kind of star it was before it fired.

A new study of Hubble Space Telescope images reveals just the sixth example of a star that was identified before and after it went supernova.

The problem, in part, is that the vast majority of supernovas that are spotted exist beyond our Milky Way Galaxy. While the supernovas become bright and obvious, it is challenging to resolve images of individual regular stars in other galaxies.

When a supernova in the Whirlpool galaxy was spotted in late June, plans were made to point Hubble that way. An image of the exploded star was made July 11.

In a Hubble archive image of the Whirlpool galaxy taken in January, astronomers were able to find the supernova's progenitor star in the same location.

Astronomers can now say the star was a red supergiant with a mass seven to 10 times that of the Sun.

SN 2005cs belongs to a class of exploding stars called "Type II-plateau." A supernova of this type results from the collapse and subsequent explosion of a massive star whose light remains at a constant brightness (a "plateau") for a period of time.

The finding is consistent with the idea that the progenitors of supernova explosions are red supergiant stars with masses eight to 15 times the Sun's mass.

The finding "strongly reinforces" the notion that Type II-plateau come from the low-mass end of massive stars," Alex Filippenko, a researcher at the University of California, Berkeley, told SPACE.com. "There had not been that much evidence for this."

Stars with masses lower than eight times that of the Sun can't explode, scientists say. Instead, contract to white dwarfs and blow off their outer atmospheres.