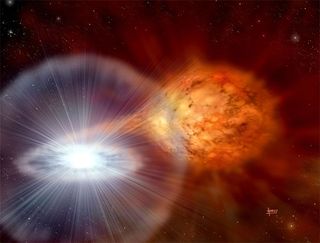 A artist's impression of the nova explosion in RS Ophiuchi,a binary star system located 5,000 light-years away. The red giant is dumping gas onto the surface of the white dwarf, setting off thermonuclear explosions much more powerful than those that occur on the sun.
(Image: © David A.Hardy/www.astroart.org & PPARC.)

InFebruary, a faint star a few thousand light-years away flared suddenly, beamingso brightly that for a few days it was visible to the naked eye.

The star isa stellar corpse the size of Earth, known as a whitedwarf, and it is paired in a binary system with a redgiant, a dying, bloated star that once resembled our Sun. The red giant hasbeen dumping gas onto the surface of the white dwarf, and every few years,enough matter accumulates to set off a giant thermonuclear explosion.

It was oneof these explosions, called a "nova,"that astronomers and stargazers detected earlier this year.

Thetwo-star system, called RSOphiuchi, is known as a recurrent nova because five similar eruptions havebeen detected before. The first observation occurred in 1898; the last eruptionprior to this latest one happened in 1985.

The newobservations, made using advanced radio and X-ray telescopes not availableduring the last outburst, reveal the explosion to be more complex than waspreviously assumed.

Standardcomputer models had predicted a spherical explosion with matter ejected in alldirections equally. The latest observations instead showed that the explosionevolved into two lobes, confirming suspicions that the nova outburst produces twinjets of stellar material that spews out from the white dwarf in oppositedirections.

"Theradio images represent the first time we've ever seen the birth of a jet in awhite dwarf system. We literally see the jet 'turn on,'" said MichaelRupen, an astronomer at the National Radio Astronomy Observatory who studied RSOphiuchi using the Very Long Baseline Array (VLBA).

Asimpressive as the nova are, they might just be precursors for a more violentsupernova explosion that will occur in the future, scientists say.

The whitedwarf's thermonuclear blasts are similar to those that occur on the surface ofthe sun, but they can be over 100,000 times more powerful. During eachoutburst, an amount of gas equal to the mass of the Earth is flung into space.Some of this ejected matter slams into the extended atmosphere of the inflatedred giant, creating blast waves that accelerate electrons to nearly the speedof light. As the electrons travel through the stars' magnetic fields, they emitradio waves that can be detected by telescopes on Earth.

The blastwaves move at over four million miles (about 6.4 million km) per hour. For afew weeks during each outburst, the white dwarf becomes a red giant.

"Afterthe [thermonuclear explosion], the white dwarf will puff up into a red giantfor a few weeks as the hydrogen that has been blasted into space fuses intohelium," explains Richard Barry of the NASA Goddard Space Flight Center inMaryland.

Japaneseastronomers first detected signs of RS Ophiuchi's latest nova on the night ofFeb. 12. Follow-up observations by radio telescopes revealed an expanding blastwave whose diameter was already the size of Saturn's orbit around the Sun.

Findingsfrom the Rossi X-ray Timing Explorer and the VLBA/EVN observations are detailedin two separate studies published in the July 20 issue of the journal Nature.

The redgiant and white dwarf stars making up RS Ophiuchiare separated by about 1.5 astronomical units, or one and a half times thedistance the Earth is from the sun. The binary star system is located in theconstellation Ophiuchus, about 5,000 light-years away--very close byastronomical standards.

"Wehave a ringside seat for this very important event," Barry told SPACE.com.Barry is a co-author on another study on RS Ophiuchi that will appear in anupcoming edition of Astrophysical Journal.

When theoutburst is over, gas will once again build up on the white dwarf and theexplosions will begin anew, perhaps in some 20 years time. It's unknown whetherthe white dwarf casts off all of its accumulated matter during each eruption,or whether some of the material is being hoarded and slowly increasing the massof the dead star.

"Ifthe white dwarf is increasing in mass then it will eventually be ripped apartin a titanic supernova explosion and the cycle of outbursts will come to anend," said Tim O'Brien of the University of Manchester, a co-author on oneof the Nature studies.

Whitedwarfs must attain a critical 1.4 solar masses before they can explode in whatscientists call a Type1a supernova. The white dwarf in RS Ophiuchi is near this critical limitnow, but it will still probably need hundreds of thousands of years to accumulatethe final bit of mass, scientists say.

Because allType 1a supernovas emit the same amount of light at their peak, they serve asimportant "standardcandles" which astronomers use to calculate cosmic distances.

"Ourunderstanding of these objects is exceedingly important as any miscalculationor uncertainty in the total light of output of supernovae could have a dramaticeffect on our calculations of the scale and size of the entire universe,"Barry said.