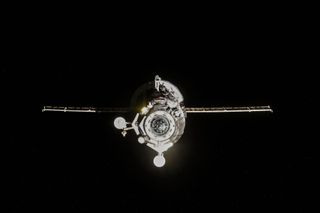 A file photo of a Russian Progress 55 cargo ship leaving the International Space Station in July 2014. Russia's latest cargo ship Progress 59 launched on April 28, 2015, only to suffer a serious malfunction after reaching orbit. The U.S. Air Force has spotted 44 pieces of debris around the spacecraft.
(Image: © NASA)

An ailing Russian cargo spacecraft is falling from space and will soon meet a fiery demise in Earth's atmosphere after suffering a serious malfunction on Tuesday (April 28), a NASA astronaut said today.

The unmanned Progress 59 spacecraft is doomed to burn up in Earth's atmosphere in the next few days after failing to deliver more than 3 tons of supplies to the International Space Station, NASA astronaut Scott Kelly told reporters in a series of televised interviews. Video directly from Progress 59 has shown it to be tumbling in an out-of-control spin.

"We were both told recently by both the U.S. and Russian flight control centers that Roscosmos [Russia's space agency] announced that the Progress will not be docking and will re-enter the Earth's atmosphere here some days in the future to be determined," Kelly said from the station as he and crewmate Mikhail Kornienko answered questions.

Russia launched the Progress 59 cargo ship Tuesday atop a Soyuz rocket from Baikonur Cosmodrome in Kazakhstan. The launch went smoothly, but shortly after the spacecraft separated from its rocket, Russian flight controllers had difficulty receiving telemetry data from the craft.

Later in the afternoon, NASA reported that the Russian flight controllers were unable to send commands to Progress 59, and that it was spinning uncontrollably. Repeated attempts to regain control of the automated spacecraft have been unsuccessful.

Today, the U.S. Air Force Space Command reported that its space junk tracking center has spotted 44 piece of debris near the Progress 59 spacecraft. However, officials with the Air Force's Joint Functional Component Command (JFCC) at the Joint Space Operations Center, which is monitoring the spacecraft, were unsure if the debris was from Progress 59 itself or the craft's upper-stage rocket body. Air Force officials said they will continue to track the spacecraft.

"Human spaceflight safety is our chief concern," Lt. Gen. Jay Raymond, JFCC Space and 14th Air Force (Air Forces Strategic) Commander, said in a statement. "We will continue to monitor the situation and work with our government, international and industry partners to ensure the safety of the astronauts onboard the ISS and provide for the long-term safety, sustainability, security and stability of the space domain."

NASA spokesman Dan Hout at the Johnson Space Center in Houston told Space.com today that the debris around Progress 59 does not pose a threat to the International Space Station or the crew on board. Huot stated yesterday that the crew is also not in danger of running out of essential supplies, despite the loss of the Progress 59 cargo, and has about four months of supplies on hand.

Versions of Russia's unmanned 24-foot long (7.3 meter) Progress spacecraft have been used by the Russian space agency since 1978. The robotic cargo ships have been hauling cargo to the space station since 2000, with one crash in 2011 related to a rocket malfunction.

Russia's Progress spacecraft are disposable vehicles designed to burn up in Earth's atmosphere after completing their missions.