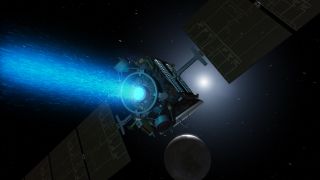 One month after its historic arrival at Ceres, NASA's Dawn spacecraft is preparing to begin its intensive investigation of the dwarf planet.

Dawn was captured by Ceres' gravity on March 6, becoming the first probe ever to orbit a dwarf planet, as well as the first to circle two different objects beyond the Earth-moon system. (Dawn orbited the protoplanet Vesta from July 2011 through September 2012.)

Dawn has spent the past few weeks inching closer and closer to Ceres, the largest body in the main asteroid belt between Mars and Jupiter, and will reach its initial science orbit on April 23, NASA officials said. [Photos: Dwarf Planet Ceres, the Solar System's Largest Asteroid]

Dawn has not been taking pictures during the descent thus far because the probe has been on Ceres' dark side. Dawn will capture some images on April 10 and April 14 for navigation purposes, but the best photos won't start rolling in until the science campaign starts.

"By early May, images will improve our view of the entire surface, including the mysterious bright spots that have captured the imaginations of scientists and space enthusiasts alike," NASA officials wrote in the update. "What these reflections of sunlight represent is still unknown, but closer views should help determine their nature. The regions containing the bright spots will likely not be in view for the April 10 images; it is not yet certain whether they will be in view for the April 14 set."

Both Vesta and Ceres are intact protoplanets left over from the solar system's early days. Studying them should shed light on the long-ago planet-formation epoch and reveal insights about how Earth and other rocky worlds are put together, mission scientists have said.

Dawn's instruments and other systems are in excellent shape, NASA officials said. If all goes according to plan, the spacecraft will study Ceres from a series of increasingly closer-in orbits until June 2016, when Dawn's mission will come to an end.