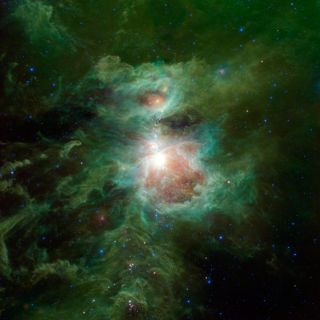 The Great Nebula in Orion is a intriguing place. Visible to the unaided eye, it appears as a small fuzzy patch in the constellation of Orion. But this image, an illusory-color composite of four colors of infrared light taken with the Earth orbiting WISE observatory, shows the Orion Nebula to be a bustling neighborhood or recently formed stars, hot gas and dark dust. The power behind much of the Orion Nebula (M42) is the stars of the Trapezium star cluster, seen near the center of the above wide field image. The eerie green glow surrounding the bright stars pictured here is their own starlight reflected by intricate dust filaments that cover much of the region. The current Orion Nebula cloud complex, which includes the Horsehead Nebula, will slowly disperse over the next 100,000 years.
(Image: © NASA, JPL-Caltech, UCLA)

Michelle Thaller is the Assistant Director of Science at Goddard Space Flight Center at NASA. She contributed this article to Space.com's Expert Voices: Op-Ed & Insights.

A lot of people ask me if being an astronomer changes the way I look at life. To some degree, I guess there's no way it couldn't. There's a lot you have to let go of — things that seem so obvious and straightforward in people's everyday lives take on a scale and complexity that the human brain can't process. So you give up trying. I have no idea what it really feels like to travel through a distance like a light-year, a little more than a trillion miles. I can't easily visualize what 1,000 of something is, let alone a billion.

My mind doesn't grasp the scale of the universe any better than anyone else's, yet this is the environment that I go to work in, talk to my friends at cocktail parties about and muse about with my husband before we turn off the lights. Andrew (said husband) works on the James Webb Space Telescope (JWST), which, when launched, will have the power to peer into the universe more than 13 billion light-years away. Effectively, it will look back to the time when the first stars began to shine. So he knows about this stuff. We often hold hands and buffer ourselves against all this scale. We even have an expression for it: "You still have to feed the cat."

Whenever we're listening to a particle-physicist friend of ours describe multiple rolled-up dimensions or reading the latest paper that asserts that space and time don't really exist and maybe we're all just a single quantum-entangled particle, we look at each other with some wistfulness and repeat our cat mantra.

All those discoveries can be overwhelming, and sometimes it behooves us to remember that, in fact, there are some fixed points of certainly in it all. My cats would agree with that, or at least there would be hell to pay if we forgot to feed them, lost in the rapture of the cosmos.

In my podcast on the Transistor series, "The Ultimate Wayback Machine," I speak to two exceptionally brilliant women, Nancy Grace Roman, former chief of astrophysics, solar physics and relativity at NASA’s Office of Space Science and Jane Rigby Deputy Project Scientist for Operations of the James Webb Space Telescope, about what time really means when you have to let go of the idea that there is a real past, present and future.

For example, consider what you see when you look up at a single constellation. Orion has always been my favorite, and I do a little dance every year when I see it for the first time in the autumn sky — seriously. I've also published papers on some of the stars in Orion's belt, which are actually ginormous monsters: closely bonded binary stars that race around each other, orbiting in just a few days. The stars you see in that constellation are not all at the same distance from Earth, so the light has taken different amounts of time to reach your eye. You're not seeing a single point in time, but a span of several hundred years that somehow all arrives at your eye together, all at once. That gives me some pause, every time I look up at what now seems like an old friend in the sky.

But letting go of human perspective doesn't stop there. Not only does the universe leave the human sense of scale and time woefully in the dust, but people's literal senses — what they can see, hear, smell and touch — are also an incomplete picture of what is happening. Take sight: Human eyes are sensitive to only a tiny range of light energies. All around you, information about an invisible world is pouring into your eyes, but nothing in your retina reacts with it; no signal neurons are fired to send information to your brain that something is right in front of you. []

Again, take Orion: The space between the stars in this constellation are filled with gas and dust from a vast stellar nursery that is churning out hundreds of new stars at this moment. Near the top of the familiar figure of Orion is the star Meissa (or Lambda Orionis), which is ringed by an expanding shell of gas 130 light-years across, the remnant of a spectacular stellar tantrum. If your eyes could detect infrared light, light that is just a bit too low in energy to react with human retinas, you would see Orion filled with huge, glowing rings and clouds stretching between the stars.

In fact, visible light is not a very good way to see the universe. Yes, Earth's star puts out most of its energy in yellow-green light, so it made good evolutionary sense for humans to use as much of that range as possible. But there are so many things out there — gas clouds, star nurseries, planets, galaxies at the limit of humanity's deepest views — that just don't happen to shine in visible light. In fact, the majority of radiation emitted by everything in the universe is in the infrared range, inconveniently out of human sensory limits.

One of the big differences between the upcoming JWST and the wonderful Hubble Space Telescope is that in the last 25 years since Hubble's launch, astronomers have gotten much better at seeing the invisible universe. Hubble can make some observations just a bit into the infrared and ultraviolet parts of the spectrum of light, regions just a bit too low and too high in energy for the eye to see. But here's the really amazing thing: JWST will not be able to see "visible light" at all. Astronomers are going full bore here. Infrared light is the best way, hands down, to see the majority of stuff in the universe. So JWST will concentrate solely on that kind of light. The images JWST returns will be spectacularly beautiful, but they will not be anything like what the human eye sees. [Infrared: More Than Your Eyes Can See]

I often get asked whether Hubble images are real, or whether humans could see galaxies and stars like Hubble does, if people were just that much closer to the objects. Certainly, all the light that makes up a Hubble image is real, but why would you ever want to make a several-billion-dollar observatory that would see the universe in the crappy, incomplete way the human eye does? Not only is Hubble's eye much more sensitive, but it can also stare and gather light for hours or weeks, teasing out exquisite details on the dimmest, most distant objects in space. JWST will be a step beyond that. All the light that will make up the images will be invisible to you. But it is completely real. Rest assured, the light is really there, but now observers have to let go of their human perspective once again.

What this leap into the invisible universe buys is truly amazing. Infrared light can cut through light-years of obscuring dust, providing a glimpse of the first moments of infant solar systems or permitting exploration of the violent heart of the Milky Way galaxy, where a massive black hole lurks. Planets do not give off visible light; when you look at Venus or the moon in the sky, you see reflected sunlight, not any light emitted from the object itself. In infrared light, planets shine like beacons, allowing scientists to decouple these objects' light from the stars they orbit. This is possible even when the planets are too distant to see as separate objects, lost in the glare of their parent stars. Intriguingly, some of the chemical fingerprints astronomers would love to see in exoplanets (planets around other stars), like oxygen and water vapor, can be found using infrared light.

I am truly hoping that some time after JWST launches, scientists will know of an Earth-like planet with strong signs of oxygen and water. This will not, in itself, be a guarantee of life, but yet another stepping stone to finding humanity's distant cousins in the universe. And with infrared eyes, you can see further away.

As light passes through the expanding space of the universe, it gets stretched out by the expansion and loses energy. Pass through a lot of space (billions of light-years, say) and you lose a lot of energy. So a single particle of light that left a star with impressively high energy (say, a particle of visible or ultraviolet light) will arrive at Earth's telescopes limping along at infrared energies, too exhausted by its journey for human eyes to see. The Hubble Space Telescope currently holds the distance record for observing galaxies: a little over 13 billion light-years away. JWST should break that record, easily.

So once again, humanity finds itself at a frontier, eager to see what's over that next hill. And again, taking the next step requires moving out of humanity's comfort zone, leaving its common experience, its tribal sense of scale and even the comfort of its senses behind. Do people lose a bit of humanity each time they do this, or do they become more and more citizens of the universe? Like almost everything I work with as an astronomer, I have no answer for that. But it's time to feed the cat.

About Transistor: Transistor is a STEM podcast from PRX. Three scientist hosts — a biologist, an astrophysicist and a neuroscientist — report on curiosities and current events in and beyond their fields. Sprinkled among their episodes are special science stories from around the globe. Presented with support from the Sloan Foundation. You can subscribe to Transistor here.