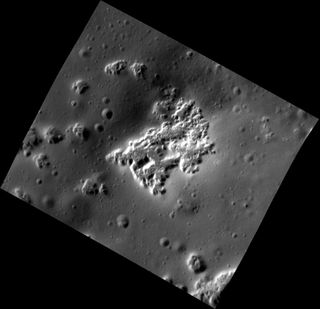 This high-resolution view of Mercury shows hollows — the irregularly shaped, flat-floored depressions — on the southwestern peak ring of the Scarlatti basin. Although there are a number of small impact craters surrounding the hollows, there are few, if any, within the hollows themselves, indicating that they are much younger than the rest of the planet's
(Image: © NASA/Johns Hopkins University Applied Physics Laboratory/Carnegie Institution of Washington)

Mercury, the barren planet closest to the sun, may seem like a dead world, but new images taken by a NASA probe nearing the end of its life reveal the planet may still be undergoing geological activity.

The new images — taken by NASA's MESSENGER spacecraft — show that Mercury has strange features known as "hollows" (irregularly shaped, flat-floored depressions) that are only a few tens of meters deep and no more than a kilometer in diameter, scientists with the mission said. That finding suggests that Mercury may have lost some of its lighter elements, such as sodium and potassium —a phenomenon that may still be happening today, the scientists said.

"MESSENGER revealed many surprising things about Mercury," said MESSENGER participating scientist David Blewett, of the Johns Hopkins Applied Physics Laboratory. Blewett was part of the team that investigated the unusual features on Mercury as part of the low-altitude campaign, which makes up the last six weeks of MESSENGER's orbit around the planet. These and other findings from the campaign were presented at the 46th Lunar and Planetary Science Conference in Texas on March 16. [See more MESSENGER photos]

"Hollows are one of the surprises in terms of the geological processes that shape the surface at small scales," Blewett told Space.com via email.

When NASA's Mariner 10 flew by Mercury three times in the mid-1970s, it spotted what Blewett described as "certain odd, bright patches" within the impact craters. The patches showed up again during MESSENGER's flybys of the planet. It wasn't until 2011, when MESSENGER entered orbit and began to capture higher-resolution images, that the bright areas were revealed as shallow, irregularly shaped depressions on the surface.

Hollows are relatively small landforms — shallow features on the surface that stretch at most 0.6 miles (1 kilometer). This small size implies a relatively young age, as cratering would have eroded them away over time. The hollows do not contain many, if any, impacts within them — another characteristic that suggests that they are fairly young. Finally, the hollows' sharp edges also likely indicate these features were made relatively recently.

"The hollows are remarkable because they have a crisp, fresh appearance," Blewett said. "They are probably younger than a few tens of millions of years, but some hollows are probably forming today. It is amazing to find ongoing geological activity modifying the surface of Mercury."

While Earth's moon lacks similar features, the southern polar cap of Mars and some of the icy satellites in the outer solar system have shapes that resemble the hollows. Water ices on the Red Planet and distant moons mix with nonice material such as dirt and rock. When the sun heats these regions, the ice sublimates — meaning it changes directly from a solid to a gas. Voids grow within the features, and the remaining dirt/rock mixture collapses, creating pits.

Unlike Mars and the outer moons, the bulk of Mercury's surface lacks ice. But that doesn't mean the process is completely invalid.

"It appears that there is something in the rocks that can't stand up to the punishing environment on Mercury's surface and, as a result, is lost in a sublimationlike process," Blewett said.

Not only does Mercury suffer blistering temperatures as high as 801 degrees Fahrenheit (427 degrees Celsius), but it's also bombarded with energetic ions carried from the sun by the solar wind — in fact, more per unit area than any other planet. The weak magnetic field offers scant protection, which, in turn, often accelerates charged particles to even higher temperatures before slamming them into the surface. Finally, Mercury's proximity to the sun means it gets hit by more micrometeorites, which often travel at higher speeds than those that hit Earth's moon. All of these factors create grueling conditions on the planet.

In addition to revealing the pitting on Mercury, MESSENGER (short for MErcury Surface, Space ENvironment, GEochemistry, and Ranging) provides clues to the identity of the elements involved in their formation. Instruments on the spacecraft reveal that Mercury has more volatiles — elements with low boiling points than expected — such as potassium, chlorine and sulfur. Their presence surprised scientists, who, before MESSENGER's arrival, thought these elements would be rare on the rocky planet.

"Based on the abundances that were measured, it seems likely that it is a sulfur compound that is being destroyed and lost to space in the locations where hollows are forming," Blewett said.

Following its 2004 launch, MESSENGER became the first spacecraft to enter orbit around Mercury — a feat it accomplished in 2011. On its second extended mission, it slowly maneuvered closer to the planet; in January 2015, its orbit was only 9.3 miles (14.9 km) above the surface. As the mission heads toward its April 2015 conclusion, the close approach allows for more detailed measurements of Mercury's features.

In addition to the hollows, the MESSENGER team identified several features known as "scarps" that are smaller than those previously spotted. [10 Strange Mercury Facts]

As Mercury's core cools, the planet's crust contracts, leading Blewett to call it "the amazing shrinking planet." Over the past few billion years, he said, the diameter of the planet has decreased by several kilometers. As a result of the contraction, one section of crust is thrust up and over the block nearby, thus creating the long cliffs known as scarps.

Most of the scarps identified over the course of MESSENGER's mission are hundreds of kilometers long. But high-resolution images from the low-altitude campaign reveal several smaller scarps more than an order of magnitude smaller than those previously spotted. Blewett said these smaller scarps are likely very young, and may even be forming today.

The campaign also took close-up images of the only water ice known to exist on Mercury: frozen puddles found in permanently shadowed regions near the planet's poles. Like the hollows, the ice has well-defined edges and few traces of small, young impact craters, indicating their youth.

According to MESSENGER Principal Investigator Sean Solomon, of Columbia University in New York, the water stored in the polar ice deposits was most likely carried to Mercury by impacts of comets and volatile-rich asteroids, similarly to how water is thought to have arrived on Earth.

"Mercury's polar regions thus serve as a witness plate to the delivery to the inner solar system of water and organic compounds from the outer solar system — a process that, much earlier, may have led to prebiotic chemical synthesis and the origin of life on Earth," Solomon told Space.com by email.

Finally, the close orbit allowed for a detailed mapping of the planet with the spacecraft's X-ray Spectrometer, which determined the abundances of key rock-forming elements and allowed the surface elemental composition of Mercury to be mapped in detail.

End of the line

In April 2015, the mission will end with a fiery bang as MESSENGER is deliberately crashed into the surface of Mercury. Over the course of its lifetime, the spacecraft has changed the way humans view the planet closest to the sun. [How to Live on Mercury]

"MESSENGER has been a fantastic mission that has given humans our first global look at one of Earth's closest relatives," Blewett said. "Mercury turned out to be stranger than anyone would have guessed. It looks roughly like the moon, but MESSENGER has shown that Mercury is vastly different from the moon in just about every way."

By changing the way scientists see Mercury, MESSENGER has affected theories about how the solar system formed.

As the mission concludes, the MESSENGER team will work together for another year, reviewing the newest measurements, as well as older measurements, and archiving the final data sets. In addition to collaborating on scientific paperwork describing the new findings, they will team up on a book summarizing the new knowledge of the innermost planet, Solomon said.

"I am very lucky to have been part of the MESSENGER science team since before the first Mercury flyby," Blewett said. "I was among the first humans to see the stark beauty of what was once 'Mercury incognito.' I have been working with a super team of scientists and engineers, and made good friends. It will be sad when the radio tracking tells us that the spacecraft made its final orbit, knowing that a tiny new impact crater has appeared on the surface."

Solomon also expressed his appreciation for being a part of the team.

"The MESSENGER spacecraft has survived the severe thermal and radiation hazards of the inner solar system, including strong heating by Mercury's dayside surface and direct impact by coronal mass ejections and other energetic solar events," he said. "Even though we know that the probe's days are numbered, MESSENGER has been a reliable source of exciting new information, and its loss will sadden all of us who have followed its successes."